A celebration of life! 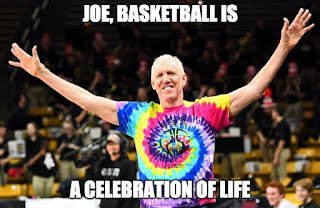 For seven years, I covered the Los Angeles Clippers and NBA for the Long Beach Press-Telegram and a chain called the Los Angeles Newspaper Group. During that time, I'm not sure I ran across a more colorful dude than Bill Walton.

Bill did color commentary for the Clippers in my first year on the beat, and he took the time to know me a bit. It wasn't like we were best friends, but our exchanges were real. He knew me, treated me like a human being, and I liked his vibe.

So I recommend Back from the Dead (2016) by Bill Walton, who has lived an outside-of-the-box life and has incredible stories about growing up, John Wooden and his horrific injuries.

One thing that first struck me about Bill was how he was such an individual, not afraid to be "out there" and entertaining. He typically arrived to Clipper games in a track suit, then dressed with the players into his commentating suit, then changed back after the game.

On one terrible Clipper night, the team gave away a huge lead, and players fought among themselves. It was not far from the time when a player referred to playing for the Clippers as being in jail. Among an ugly post-game scene, I asked Bill, why he still commentated and put up with the constant losing.

"Joe, you have to remember that basketball is a ballet, poetry in motion," he said. "These are the greatest athletes in the world. Every night is a celebration of life." 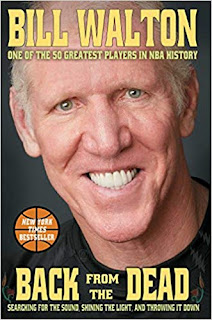 In his book, Bill details his terrible injuries, and I found his insights on John Wooden to be captivating. He repeatedly points out that Wooden called him the slowest learner of all-time. But, you know what, at least he did learn.

It's hard to be an individual in the sports world nowadays. I think a lot of times individual becomes synonymous with selfish, but those are two entirely different words. We have a lot of selfish people, but not necessarily individuals.

So Bill Walton was indeed an individual, and the next time you happen to watch a sporting event, remember that above anything else, it is a "celebration of life."

Email ThisBlogThis!Share to TwitterShare to FacebookShare to Pinterest
Labels: 10 sports books I recommend, Back from the Dead by Bill Walton, UCLA basketball book