Baseball matters more now than ever 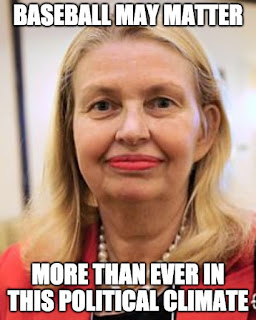 It's an absolute pleasure for me that my daughter, Sophie, actually likes baseball. We watched Game 1 of the National League Championship Series, riveted by a close game and no hitter that moved to the eighth inning.

Baseball is a game of subtlety. It is utterly American, and I love watching and listening to it more than any sport. However, the average viewer of a baseball game is 53, and 50 percent of the audience is 55 and older.

When Why Baseball Matters by Susan Jacoby came out last year, I was all over it. I like to think of baseball as a unifying American pastime. Does it matter if we have different political views or different backgrounds? I like to think we can unite with baseball.

One unexpected point that I respond to in Why Baseball Matters is how generations don't intermingle as much as they used to. Jacoby spent time growing up in her grandfather's bar south of Chicago. I conjecture that she learned more about life and relationships there more than she would have in school. So often, families find themselves on different devices and looking at different entertainment. I find it refreshing when we all are looking at the same thing.

Baseball is a backdrop. It is meant to have pauses and dead time. It's OK to converse during the game. With our image-driven world now, baseball has become a throwback. Jacoby argues that it is more important than ever now because the lowest-common denominator of American culture of disruption, distraction and interruption is prevailing. 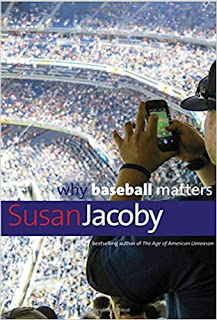 In many ways, major-league baseball is lost. Smart phones punctuate the stands, and huge scoreboards entertain throughout "down time." I see a countdown clock at games in between innings and batters. Do we really need that?

No matter what ESPN does, I don't believe baseball is made for highlights. Yes, we can see diving catches and home runs or even walk-off mobs at home plate. But the drama of the game lies in scenarios like the 2-2 count. After four consecutive sliders, here comes the fastball.

The drama is in the details — grounding out to second base and advancing the runner to third or getting to a ball quickly in the outfield to prevent the runner from going to third or blocking a pitch in the dirt with a runner on third. The irony of modern day living is that somehow baseball is the most American pastimes but, strangely, it has become un-American because of its slower pace and subtlety.

Baseball certainly matters to me. It looks like it matters to my daughter, too. We get the game, and we love it. We love each other, too, and baseball reminds us of that.