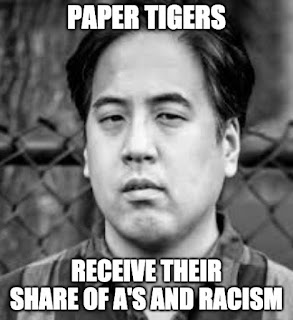 I must say that Wesley Yang should go down as one of the most important writers of the 21st century, and his stuff hits me at my core.

I'm a total white guy. True. However, my first wife was full-on Asian (Taiwanese), and so my daughters are Taiwanese Polacks. I have been teaching at a school that is about 65 percent Asian for 10 years, and so I have tried my best to understand my students and, to the best of my ability, their individual and cultural identities.

In Wesley Yang's The Soul of Yellow Folk: Essays (2018), he tackles the Asian life in America from various angles, and it's one of the best gosh darn books that's out there. See, you got to understand this. In many Asian cultures, it's the cultural norm to not express emotion or truth or what's real (at least that's what I gather), but Yang goes stone-cold honest, time and time again, and through eloquence and complexity, puts into words what I have seen as a second-hand white guy.

The diminished treatment of Asian-Americans from mainstream white people is ridiculous. Even to this day, many comedians feel it's OK to marginalize and demean Asians by stereotyping, and, honestly, these white guys have no clue what the Asian-American world entails. I've rolled my eyes at Bill Maher and Sarah Silverman, but, my bad, those two know it all — and they're just kidding.

As I was gushing over The Soul of Yellow Folk, I tweeted Yang, and we had a couple exchanges. I must give him props for responding. Nice! But what I gather is this: Guys like me, and even The New York Times, want him so badly to be the voice of the Asian-American, the champion to let white middle America know what's up. But in reality, he's just a guy, a great writer, most likely with his own personal issues that he is tackling. 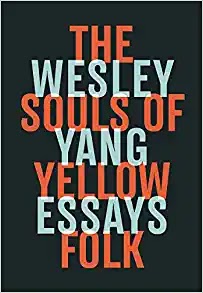 So once I release what I want Yang to be and accept who he is, I still love his book. Yeah, it's just a compilation, and I so desperately want him to put together his masterpiece. But nobody else has been writing essays like this, anyway.

In his opening essay, he writes about Seung-Hui Cho, who was responsible for 33 deaths in the 2007 Virginia Tech shooting. While we, of course, accept the basic truth that mass shootings are absolutely, horrifically wrong, Yang vaguely connects to Cho through appearance. But there's more, he gets into the subtle conversations that white people have with the nerdy Asian kid, and I see and feel the depth of pain from constantly being dismissed, not being taken seriously and not even in the conversation of getting the girl.

I should probably look up the quote to get it exactly right, but I remember reading a line in Yang's book that stopped me in my tracks. It was something to the effect of "How would you feel if you always were looked at as the quiet, agreeable ally of the white man but never truly inhabited his world or got the benefits of bing white?"

OK, I ratioinalize my laziness to get that exact quote with Yang's inability to give us the masterpiece he can do. However, maybe he is just cool who he is. It's an American fetish to want a celebrity. We haven't done it with many Asian-Americans, but only a crazy select few.

Maybe Yang would say that those so-called Asian-American celebrities are now just Americans. He's Asian-American, and maybe that is a better experience than just being American.