Tharp shows that creativity is a habit 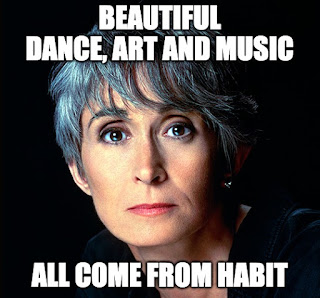 One thing that boggles my mind is how our American society treats artists. We devalue them. We shun them. We make fun of them. We shame them until they stop it with the art.

As early as, say, 9 years old, we tell them, "Well, you better figure out how you're going to make money, too."

No wonder we get the movies we have, the bombardment of advertising and way less art in our lives than we should have. American art remains in the margins because being an artist is counterculture to our consume-heavy, money-making mainstream culture.

As a teacher, I just don't see how schools cultivate artists. Music and art typically are the first programs cut, and many adults tell me that science and math are more important than art. Is that right? Why is that? Are you sure?

I firmly believe that most kids mistakenly learn that art and the humanities are superficial, non-lucrative pursuits to be dismissed. So well then, OK, they shun the arts and become unimaginative workers.

It turns out that I'm a workhorse when it comes to writing, and I have a problem with a lot of the literature out there that explores inspiration, creativity and the craft of writing. With that said, I know of no better, or more accurate, book on creativity than Twyla Tharp's The Creative Habit (2003). 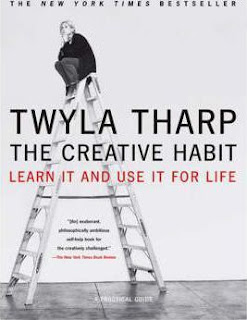 Blown away. I was blown away (figuratively) when I first read The Creative Habit because it correctly explained creativity in more depth, and more clearly, than I had ever seen. Creativity is no lightening bolt sent from the heavens to lucky ones wearing berets. No, no, creativity, like anything else, is a skill that can be developed with the proper attention and practice.

Twyla Tharp cultivated her creativity through dance and choreography. I've done it in with writing, and others do it in their select fields. However, most remain out of the arena of creativity because of misconceptions on what it actually is and the fixed mindset of conditioning of "I'm not creative." ... Poppycock!

One aspect of The Creative Habit I found particularly enlightening was Tharp's relationship with Billy Joel, who worked with her on the Broadway show Movin' Out. Billy Joel considers himself a plumber of songwriting, and I love that terminology because for those of us who actually do write, I feel that we are plumbers, too. It's how it is.

I also love Tharp's daily schedule, waking up in the wee hours every day to work out and put her on a path to creativity. She trumpeted the importance of investing in one's self and being committed, but not acting out of obligation. Some people like the idea of being an artist, more than the art itself. Well, that's good information, and a sign for them to find a different art or something in which they are passionate.

I would argue that what keeps artists perceived as elite is not the nature of what they do, but the fact that so few of them actually put in the time commitment to become experts in their art. Without financial gain looming, many would-be artists don't even try, and I think that's a shame because our society would be better with more music, art, dance, sculpture and expression. I just wish with that stuff was part of our daily habits.