Sandberg and Grant explore our options

Sheryl Sandberg and I have something in common. We both lost loved ones unexpectedly from heart attacks. She lost her husband at age 47. My dad, the XMan, was 63.

This was the type of thing that used to only happen to other people. Now, it was her, and it was me, my mom and family.

So when Option B: Facing Adversity, Building Resilience and Finding Joy was released in 2017, I jumped in on it and was not disappointed. Sandberg is an extremely powerful person, a billionaire who is the chief operating officer of Facebook. I found Sandberg's honesty and truth to be the strength of the book, which is a big-time title with 2.5 million copies sold.

I'm a fan of Adam Grant, too, and especially love this work because the raw emotion is an excellent balance for Grant's analysis. I've also read Give and Take (2013) and Originals (2016) by Grant and recommend them. Sandberg's Lean In: Women, Work and the Will to Lead (2013) is also an enormously huge book of note. 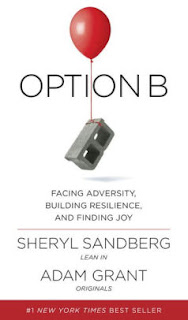 For anyone who's had a sudden loss, Option B is excellent. Oddly, I read this book around the same time as a few others that served as a gateway to me understanding more about cognitive behavioral theory (CBT).

I believe that when we mourn, our thoughts shift. For me, my thoughts became acutely negative, and once I realized that they were not reality, that they were a slanted take on the world, I soon was on the path to healing. In a sense, Option B is in a similar vein as Ariana Huffington's Thrive. Here are two extremely powerful women, writing about humanity, and I say we can never have enough nonfiction on humanity in our modern world.