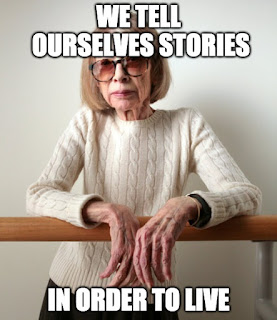 When I first pondered the idea of "the greatest nonfiction writers of all-time," however myopic that may be, Truman Capote, Tom Wolfe and Joan Didion came to mind. By ushering the New Journalism, those three made an enormous impact on nonfiction and American culture.

As I thought about them, I realized that I had more of a respect for Capote and Wolfe and an actual love for Joan Didion. Having lived in California for the past 21 years, I don't believe any writer has gotten to the truth of California more than Ms. Didion. She deserves the accolades she receives.

Ms. Didion cut through that facade in her work so well that I completely respond. Slouching Towards Bethlehem was her first nonfiction collection published in 1968, and it is a tour de force. But y'know what really puts her work over the top is The Year of Magical Thinking from 2005. 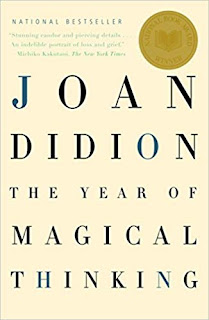 The Year of Magical Thinking is an international bestseller on mourning, and to me, it just took Ms. Didion's work to another level. For lack of a better word, a lot of our American culture is SICK.

We revere rock stars like Jimi Hendrix, Kurt Cobain, Jim Morrison, Janis Joplin and Amy Winehouse. They all died at 27. It's so weird to say, but, my God, they were babies.

Ms. Didion is "84 years young," and she was north of 70 when The Year of Magical Thinking was published. Shouldn't her path and life be more lauded than dead rock stars?

I believe she figured out a long time ago a simple tenet. Art exists to enhance life and not replace life. She blended art and life through her career. She is so significant and moving and deserves the accolades she receives.