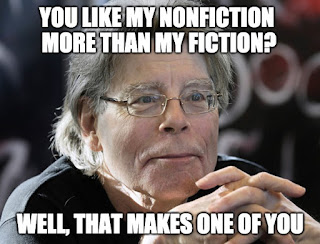 I'm not a ginormous Stephen King fan, but I do respect the guy. I must say that The Shining, Cujo, Christine, Misery and much more are deserving parts of American pop culture.

In academia, I often felt King deserved more credit than he got because he didn't get the props he deserved in the academic world. Heck, perhaps those on the tenure track were upset because they found themselves unpublished and living in places like Kirksville, Mo., while King raked in tens of millions of dollars.

As a writer, I must say that On Writing (2000) by Stephen King is a masterpiece. It's the book on writing that I relate to the most because writing, to me, is not all about divine inspiration. It's more about developing writing habits, keeping things clear and building upon that.

Maybe writing is like a golf swing. Yes, in golf, it's cool to learn how to hook and draw the ball and know how to go over, under or around trees. But more times than not, it is the basics that matter the most, and if we try to get too tricky, we know it's going to be a shank. 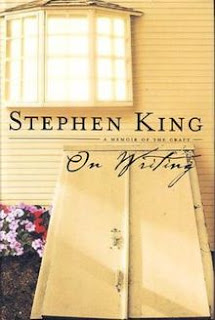 What I love most about On Writing is that it exposes truth. To be as prolific as Stephen King, one must commit to the craft, big time, and set up a world around him that allows him to be him. The ins and outs of the craft are focused upon, rather than a paralysis by analysis reasoning of who we writers are.

We know enough about ourselves. Yes, I'll introspect. But I don't want to introspect too long so I, say, miss the Tribe game.

Why do we write? Well, the next question is "Why do we breathe?" At a certain point, writing becomes an inherent part of ourselves, and it has been an absolute pleasure that King graced the world with his methods and process.

On Writing goes beyond the nuts and bolts of just writing because he delves into his alcoholism, and his insights on that topic are superb. I think when writers believe they are touching the hand of God or exploring deep parts of their soul that force us to drink to excess. Drinking also is about masculinity, and at a certain age, we drinkers realize that our consumption was a lie and we unnecessarily messed with our livers.

So I appreciate Mr. King for opening up about his life and for pointing out how intimate a relationship that reading is. We sometimes explore our true issues through writing more than any other place. Right?

On Writing also took place during the time span in which King was in his horrific accident that nearly killed him. He describes what happened, his excruciating recovery and the realities of nearly dying. Stephen King has written 88 books, and if he just did On Writing, that alone would have been meaningful enough.