How do we stop destroying black boys? 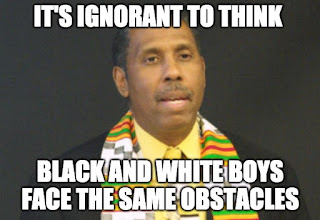 One of the most painful things that anyone can see has two parts. Part one: Go to any kindergarten classroom with African-American boys. Chances are, the boys will be smiling, engaged and pleasant.

Part two: Four years later, go to those same kids' fourth-grade classroom. It will be a shocker. The kids likely will be disengaged, in explicit or implicit battles with their teachers and often times, hardly passing fourth grade.

In Jawanza Kunjufu's Countering the Conspiracy to Destroy Black Boys (1995), he candidly examines the systemic killing and controlling of African-Americans in America. One page 1, he quotes Neely Fuller, who stated, "until you understand white supremacy, everything else will confuse you." 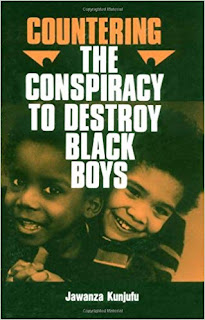 To understand the impact of slavery, Jim Crow laws, the prison system and their impact on the African-American community likely can't be done with one book. But at least The Conspiracy to Destroy Black Boys is a start.

On page 3, Kunjufu quotes Thomas Jefferson, who owned 600 slaves in his lifetime, and wrote "I advanced it, that the blacks are inferior to the whites in the endowments of both body and mind." I wish I were told early on in school that 10 of the first 12 presidents all owned slaves. Only the two Adamses did not.

In Countering the Conspiracy to Destroy Black Boys, I respond most to the facts that go underreported and to the examining of key questions of "Would African-American boys benefit from a classroom taught by African-American men?" or "Why do African-American female college students graduate in greater numbers than their male counterparts?" and "Why do black males kill black males?"

In some communities, the numbers are so high that Kunjufu points out that homeschooling can be a better answer, statistically. Easy for me to say, but I like to think I would never put my son in the school-to-prison pipeline if he faced these odds.

Nationwide, 70 percent of teachers are white women. Are they fully trained and knowledgeable enough to know the difficulties of the African-American community? Do they actually speak kindly to African-American males, or is there a hint of disdain or animosity toward them?

I put Kunjufu's book in the parenting/family section of this project because it is relevant and he also wrote Raising Black Boys (2007). Thank God that the stupid era from white people called "color blindness" is over and that there is more a shift toward the real issues and real conversations on race are more common. Or are they?