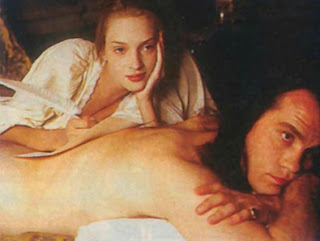 Class oozed from guests at the real classy party. I was impressed. The only class question that arose was when my friend Craig drank a 40-ounce bottle of Miller High Life. Even though "High Life" was in the title of Craig's beverage, I am uncertain the drink is actually classy. Beware of titles of classy items. Many people believe the magazine "High Society" is classy, but that may not be the case.

Anyway, as part of the fun of having such an erudite affair, some guests and I made a list on my children's dry erase board of things we deem classy. 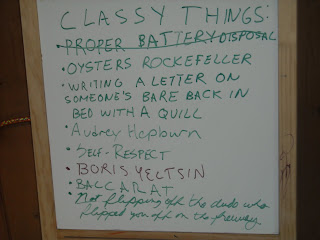 My first choice of something classy was "proper battery disposal." But I soon learned that pick is simply environmentally sound, and not necessarily classy. I then changed mine to "writing a letter on someone's bare back in bed with a quill," just like in the classy movie "Dangerous Liaisons." I later realized that is better categorized as sexy.

Thank goodness, some guests had extremely classy selections. One was Audrey Hepburn, who after being the top actress of her generation become a globe-trotting humanitarian (I believe her later life made her even classier.). 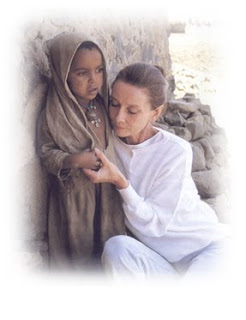 Another response that affected me was "baccarat." Oh, yes, that is quite an exquisite game. I concur with that selection. I've often heard the argument that we in the Snooze Button Generation (TM) have less class than our predecessors. If Audrey Hepburn, baccarat and martinis have been traded for Paris Hilton, Texas hold 'em and Bud, we may have a problem.

But who am I to judge? I like hold 'em, don't mind an occasional cheap beer and have never personally met Paris Hilton.