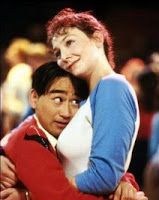 The startling news of John Hughes' death today made me, and I would imagine many members of the Snooze Button Generation (TM), reminisce about his superb body of work. To recap, these are some John Hughes films: Sixteen Candles, The Breakfast Club, Weird Science, Pretty In Pink, Ferris Bueller's Day Off and Some Kind of Wonderful.

Now, Hughes also wrote Vacation, AKA National Lampoon's Vacation, and is also responsible for Planes, Trains & Automobiles, Uncle Buck and an array of crap. However, those aren't exactly "John Hughes films," by any logical definition because they do not have teen relationships as their focus.

Anyway, despite the ridiculously insensitive and stereotypical depiction of Long Duck Dong, which seemed perfectly fine in the '80s to me, I am a huge fan of John Hughes films. While I pay my respects to Mr. Hughes, I also would like to take a moment to question a few plot issues I always found problematic.

1) The Breakfast Club — If one smokes marijuana, runs around a library, then enters a smoke-filled room and yells, it seems unlikely -- perhaps impossible -- that a glass door will shatter.

2) Weird Science — There's a magnificent scene in a bar, where the phrase "she's into malakas, Dino" is delivered. Wouldn't Anthony Michael Hall and "Wyatt" at least get carded in the bar? Or at least, shouldn't the idea of them being underage by addressed in passing? (Strangely, I have no problem with the idea of two teens birthing a model, but I have a problem with this.)

3) Vacation (again, not a John Hughes film, but written by Hughes) -- I do not believe it is sexy and/or becoming to gawk at a pretty girl while kissing a sandwich. The fact that "the dog wet on the picnic basket" is pretty much irrelevant because of the absurdity of the sandwich kissing.