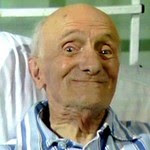 As a child of age 12, I remember watching "The Benny Hill Show" aside my maternal grandpa. I found no humor in the show's jokes but was mesmerized by the program's scantily clad ladies.

Decades later, I saw "The Benny Hill Show" and finally found some humor in the show with the old bald guy, Jackie Wright.

Apparently, this guy was only 4-foot-11 and had such a thick Irish accent that his words were unintelligible. In other words, he was hilarious. Hill and Wright have been deceased since 1992 and 1989, respectively, and they might have played a role with some members of the Snooze Button Generation.

"The Benny Hill Show" ended in 1989, and that was also the time many in the SBG came of age. Arguably, the end of "Benny Hill" meant the end of innocence.

I believe a show is sometimes only as good as its minor characters. That's why "The Office" is a winner. Merideth, Creed and Stanley on that show have bit parts, but in almost all of their scenes, comedy ensues.

Creed Bratton, who also has the same name in real life, is "the old guy from 'The Office.'" No offense to Jackie Wright, but I found his highlights much more enjoyable than the ones from "Benny Hill."