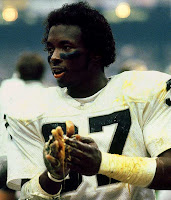 If there is ever any difficulty in my life, it is obvious what the problem is: Not enough Stickum!

Was there ever a cooler football player than Lester Hayes? The former Oakland/Los Angeles Raider had 13 interceptions in 1980, the year he adorned Stickum all over his hands, body and helmet. No defensive back ever caught more interceptions in a single season, other than Dick "Night Train" Lane. He had 14 for the L.A. Rams in 1952.

The year after Lester had all those interceptions, the NFL outlawed Stickum. He gradually used more and more Stickum throughout his glorious 1980 season, until he was basically a Stickum monster. It is rare for people to become addicted to putting glue on themselves, but this appears to be an obvious case in which it happened.

I find individuality hard to find in pro sports. Or when it is found, a lot of times it feels like an act, such as the Cincinnati Bengals' Chad Ochocinco. His antics are so over the top, he reminds of Snooki from "Jersey Shore."

Donning his Kangaroo shoes and Stickum, perhaps Lester could be compared to Snooki, too. But I don't think so. Lester "Snooki" Hayes was not putting on an act.

Apparently, Lester Hayes suffered from a stuttering problem, and he let his play - and style - speak for him. He currently lives in Modesto, turns 55 this week and remains one of the Snooze Button Generation's favorite sports stars of all-time.