Editor's Note: Obviously, this "scoop" proved to be completely incorrect based on LeBron James' move to South Beach, announced sixth months later. This post is not being deleted because sources contend that at the time of the post that the wheels hadn't "completely" been set in motion for James' departure. The SBG staff questions that contention of our sources.

LeBron James will be re-signing with the Cleveland Cavaliers in July, according to one of his closest confidants. This is no joke and is sort of a scoop by the Snooze Button Generation.

As a sportswriter, I often had scoops, and sometimes, they ran in the paper. Other times, they did not run because I received information that was "off the record." This stuff about LeBron is off-the-record information from a friend of the confidant, which sounds sketchy but is true in this instance. And, hey, this is a blog, not a newspaper, so this info. here is appropriate.

LeBron's July plan is coming from Maverick Carter, who is LeBron's close friend (pictured above with the King and below with the King and Coach K). Carter also is the CEO of LeBron's marketing company and was mentioned in a Plain Dealer article a few weeks ago by Brian Windhorst, arguably the best NBA writer in the business.

Carter and I have a mutual friend, who was told THERE IS NO SCENARIO IN WHICH LEBRON WILL LEAVE THE CAVS. Apparently, those close to LeBron say similar things.

Even with that information, I still have some skepticism that LeBron might bolt to the Knicks. But this fact is true: LeBron's entourage in Cleveland believes he is staying.

If you happen to not follow pro basketball, by the way, this question of whether LeBron will stay in Cleveland is a source of much debate, and there are websites, including this one, devoted to the issue.

As a Cleveland sports fan, I hope this information holds up, but ultimately, the decision comes down to one person only - LeBron. Heck, he could bring his close personal friends to New York, but right now, those pals think he's staying put. 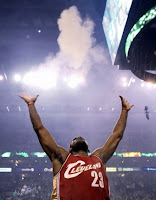