I wanna pop. I wanna Shasta.

Even though I am an adult, I am still learning. I guess we're all lifelong learners, and for me, I always discover a lot during my parents' annual two-week stay in California.

Just a few days into the trip, I have learned something invaluable from my father: Shasta soda pop is better than other sodas, despite the social stigma it has in some circles.

The XMan bases his opinion on taste, and I agree with his thesis because of Shasta's variety. There are 54 flavors of Shasta soda, and the company has an online poll where consumers can vote on their favorite flavor. I'm pulling for Club Soda.

Of course, no soda is better than Diet Mountain Dew, according to the XMan, even though he is repeatedly stymied by the lack of restaurants that stock it. Apparently, Diet Mountain Dew has "Tuned Up Taste." 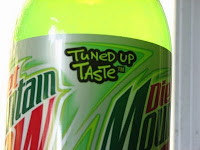 Curiously, I have noticed that many people judge others by the soda they drink. Sometimes, I am worried others might consider me cheap if they see me drinking Shasta, and I feel I might have to use a coozy to hide my drink.

But really, who cares? Let society judge me. I wanna pop. I wanna Shasta.