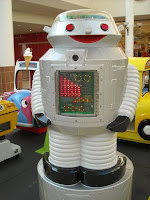 People often face the moral decision of whether to give money to others on the street. Sometimes I hear this: "Hey, buddy, do you have any spare change?"

I rarely have change, and even when I do, I don't give it. Morally, I believe where you spend your money is a vote saying you want more of what you're buying. I do not want more people asking me for money, so by that logic, I do not give money.

But what do you do when the panhandler is a persistent robot?

In an example of technology gone awry, my daughters and I have discovered a panhandling robot at the Lakewood Center Mall in Lakewood, Calif. Every minute or so, the robot's metallic voice says, "'Nother coin, please."

Although I find the panhandling robot strangely endearing, I resisted the urge to give it money. Dude, can't that robot get a job?

In an attempt by the Snooze Button Generation to see 4-year-old Sophie's imitation of the robot, a video was made. With the camera rolling, though, 2-year-old Chloe actually does the imitation. And then both girls pretend to be characters from the movie "Cars."

The girls and I often tour the Southland in search of fun and adventures. Because of our age difference, we sometimes have different opinions of what makes great fun and an adventure. The other day, though, we all agreed that we had a fun adventure in a place called the Westminster Mall: