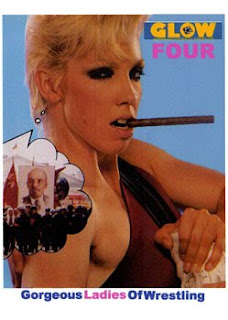 Some friends of mine have no TVs or watch no TV. I find those friends fascinating.

In contrast, I do own a TV, have basic cable and watch it at times. But beyond Yo Gabba Gabba and maybe The Office, there is no show I watch regularly. And I think I know why.

Television programming is based too much on commerce to let true artistry shine. Shows can be so formulaic that artistry is lost in the formulas viewers expect. It is rare when those formulas are stretched, but, man, G.L.O.W., the Gorgeous Ladies of Wrestling, certainly did that.

I am not exactly sure what qualifies as performance art, but G.L.O.W., which aired from 1986 to 1990, is best described as "performance art." Wrestling, skits and makeup - I don't know what to make of this. Whatever the case, I have just watched the video below three consecutive times and each time, have laughed throughout it, especially at the end when Cheer Bear is chainsawed.

Below is a compilation of G.L.O.W. skits that are so awful they're somehow excellent. My favorite wrestler is KGB, who will be damned if she is going to fall out of character.