Morganna, thanks for the mammaries

I rarely watch baseball games, but when I do, I keep hoping Morganna the Kissing Bandit bursts onto the field and smooches a player.

Yeah, that scenario hasn't happened since 1999, but I'm hoping - OK, yearning - it will happen.

As a preteen in the 1980s, I did not know what to make of Morganna, whose measurements are 60-23-39. Why was she disrupting baseball games? Every so often, she would run on a field in the middle of a game and kiss a player. Why were the adults laughing so much?

I would argue that the pinnacle of her kissing-bandit career came in 1979 when she kissed George Brett at the All-Star Game in Seattle (pictured above). The All-Star Game is a big deal, and that means this had to be a premeditated act with baseball p.r. folk involved. ... Man, baseball used to be so cool! 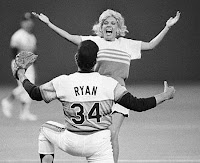 Eventually, Morganna kissed more than 50 major league baseball and NBA players. She started her career as a 17-year-old in 1971 in Cincinnati, where she first kissed Pete Rose. She ended her career in December 1999.

Fans and players had different reactions to the Kissing Bandit, and perhaps my favorite reaction came from Detroit Pistons forward Kelly Tripucka, who said, "It was like hugging a mattress. When I saw her coming at me, I thought it was like a Mack truck. I had two options – either get hit or get out of the way. I decided to get hit."

I had a real hard time finding a story asking this important question: "What ever happened to Morganna the Kissing Bandit?" She denied a request to be interviewed by the Seattle Post-Intelligencer in July 2010, then a few days later, left a voice mail with the reporter explaining her plans and whereabouts.

Today, she is 55 and lives with her husband in Columbus, Ohio. She has not been a kissing bandit for more than a decade and doesn't sign glossies of herself anymore. But if she did, she undoubtedly would sign them with her trademark signature: