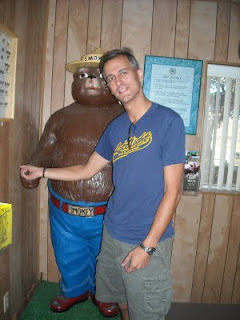 Life has a crazy way of going full circle, and, sometimes, everything feels all right and perfect. I think I got that idea from "The Lion King," in which "Circle of Life" and "Hakuna Matata" are sung. Hey, I'm with you Simba, pretty kitty, "Hakuna Matata" - no worries.

My happy feelings came out when I was preparing to hike Mount San Gorgonio on Sunday. Before the hike, I stopped at the ranger's station to pick up the proper permit to hike. And, lo and behold, who was there? None other than Smokey Bear.

Smokey and I recognized each other immediately, and he greeted me with open paws. That was extremely cordial of him because we went through some combative Snooze Button Generation interviews in previous meetings. Regardless, he totally was a cool bear, and even referenced a blog entry of mine about belt buckles. It turns out he agrees with me, that a subtle and classy belt buckle is critical to a man's attire. 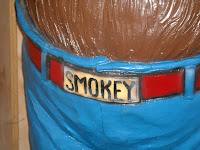 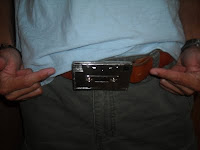 Smokey and I engaged in a pleasant conversation about hiking, wild fires and our love for nature. Light and breezy, our conversation made me realize that we were cool, that we have a lot in common and have a connection. Strangely, though, he made a couple comments that baffled me. One was this: "Yeah, I'm no sellout. I'd never have a job I didn't want or go to any awards ceremony if I didn't want to be there."

Another cryptic comment was: "I like sincere people. The 'Forgetting Sarah Marshall' guy - yeah, keep living in that world, babe."

At the time Smokey said those lines, I just shrugged them off. But later, I realized that yesterday (the day I ran into him) happened to be the same day of the Emmy Awards. He has been romantically linked to indie actress Chloe Sevigny, and I discovered that his words were obvious references to her.

The word is that Sevigny is disgruntled with her work on HBO's "Big Love" and would prefer to be a part of more artistic endeavors. If you examine Sevigny's face on many of the photos at the Emmys, she looks perturbed and not at all happy to be there.

At an Emmys after party, Sevigny was arm in arm with actor Jason Segal, best known for his lead role in "Forgetting Sarah Marshall," and those two apparently are dating. I'm not sure what to make of Smokey's comments, but at the bare minimum, it sounds certain that the two did date at one point, presumably when he was a part of the downtown New York art scene.