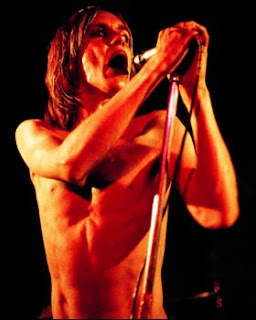 Living in Los Angeles and being a journalist or "former journalist," I sometimes run across news tips from the sports or entertainment world. Now, anyone who knows anything about news tips knows that many come from ulterior motives, are planted, insignificant or not legitimate when explored.

Finally, through all the muck and fake tips, I have run across at tip that is both legitimate and significant. Iggy Pop will don a T-shirt for the first time in nearly three decades.

This did not come from Pop's official publicist. Rather, it came from a former publicist and friend of his who didn't even think it was newsworthy. This is how part of our conversation went:

Snooze Button Generation: What do you mean he's going to wear a shirt in public?
Iggy's friend: Yeah, he's just tired of hassles at restaurants and stores. He nearly got into a fistfight the other day at Petco.
SBG: Petco? You think he'd be able to be topless in that place. I can't stand the smell at Petco.

After further conversation, the friend realized that for Pop to finally wear a shirt, it should warrant an official veiling of the shirt. Then, further discussion ensued as to what shirt in particular he will wear. Most likely, a p.r. event will be set up - perhaps at Amoeba Music in Hollywood - with Pop putting on his shirt in front of a crowd.

By the way, most people like Iggy Pop because of his raw power, but I prefer him as a Top 40 sensation. A song I love is "Candy" with Kate Pierson from the B-52s. I can think of no better song for a karaoke duet. Pop and Pierson's voices are so different that it may be the coolest duet I've ever heard.