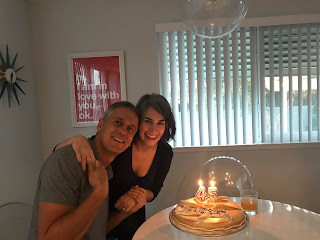 Back in 2010, the Snooze Button Generation (tm) staff determined that this blog and all of its subsidiaries would not do posts about the birthdays of CEO and founder Joe Stevens.

Today, we assure you that this is not a typical post about birthdays that says: "Mr. Stevens turned 45. Yay!!"

No, no, this is a bit different. This is a post about life, death, morality and humanity in which the phrase "memento mori" will be mentioned.

Mr. Stevens has some maudlin tendencies and sometimes looks at death as a "negative" part of life. Back in 2010, he said, "Believing in an afterlife is self-deceit. So each year, there's a bittersweet feeling about getting closer to chest-bumping the grim reaper? But y'know what? If you know what you're doing, each year gets better, and a birthday is a cause for celebration."

The Snooze Button Generation staff concludes that Mr. Stevens sometimes goes to the dark side, kind of like Paul Giamatti's character in the movie "Sideways." In fact, he was slightly depressed on his birthday and said things like, "Well, it's one more reminder of my inevitable doom. Another candle on the cake — might as well be another nail in the coffin."

Based on our years of working with Mr. Stevens, we have discovered that this death talk is part of his motif. He's like the goth girl in high school who would wear all black and say, "I wear black on the outside because that's how I feel on the inside." Just like the goth chick, Mr. Stevens does a lot of his morbid stuff for show. 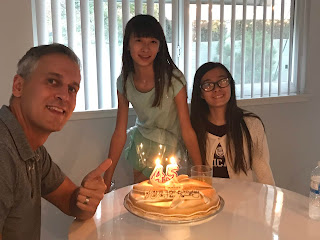 Remember, that you die, you have to die. It is perfectly fine and human. To err is human. To be human means to be mortal. Humanity is beautiful as is mortality.

We say to take it and relish it, Mr. Stevens. You have helped make our days more than worthwhile by being on your staff and have offered many insights and peeks into your life that we have enjoyed.

An extremely relevant point he made on how fast life goes is when he concluded that age should be a fraction because of our perception of time. An 8-year-old is really only 1/8th, while a 45-year-old is a 1/45th because that's what he experiences that year.

Another catch phrase Mr. Stevens has been saying of late has been "30,000 days." It's a reference to the rough estimate for a human being's life expectancy, and it keeps with his death motif. We calculated that on his birthday he was at 16,425 days and told him that.

When he heard that, he said, "Oh geez. Figures. I'm telling you it's the Catholic stuff. They make up this heaven thing, tell it to 7-year-olds, and it undermines life and humanity. It's taken me years to understand that human life is actually better than any magical after-life with unicorns and rainbows. Thank God I gave up on that heaven madness. Oh, and thanks for the happy birthday."

The SBG staff debated on whether he went to the dark side with that statement, and, ultimately, we say he did not. Perhaps it was his way of saying: memento mori.

Email ThisBlogThis!Share to TwitterShare to FacebookShare to Pinterest
Labels: birthdays, death as a negative, death as a positive, memento mori