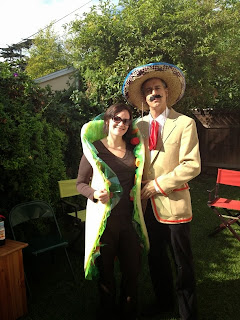 One thing I must praise Tova about is her uncanny ability to create Halloween costumes.

Growing up, I had a moderate interest in Halloween. I went trick or treating every year with my grandfather, who dressed like an ape and gladly accepted Halloween candy throughout his senior years. That was fun, but as the years went on, I became apathetic to Halloween and costumes.

But this Tova totally is into the holiday.

For our first costume, we went as the Tapatio Man and a taco. I had been pondering who in the world Tapatio was, and Tova developed our costumes that included her as a Taco, which also happened to be what the World's Most Dependable man repeatedly called her when he met her.

This year, as we will be attending a kid's party as well, we are Tigger and Pooh. 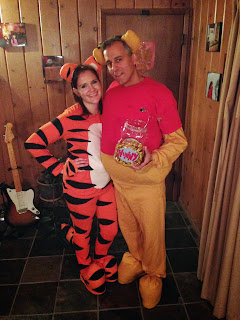 You may be saying. What is the point of this blog? Are you merely bragging about these kick-ass Halloween costumes? And, well, the answer is yes.