Hyperreality at Factory of Sadness 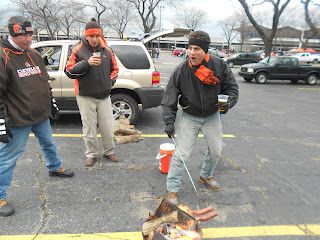 Although my brother never said those words, our trip to the Factory of Sadness during the Cleveland Browns' final game of the season turned into our version of "Jackass."

Apparently, my cousin Carlos, AKA "Know It All," has a history of hurting and/or attempting to hurt my brother at Browns games. Two years ago, he randomly tackled my bro as they approached the Factory.

As a gift to his groomsmen, my bro gave tickets to his best man J.T., me, Know It All, the World's Most Sophisticated Man and Scrappy Boy to the last game of the season. Jack, Know It All's 5-year-old son and my nephew, also joined our wolfpack.

Some sort of hyperreality ensued at the Factory of Sadness as we tailgated and cheered for our hapless Browns, who lost 13-9 to Pittsburgh and finished their season 4-12. At one point, Know It All wore of necklace of links. 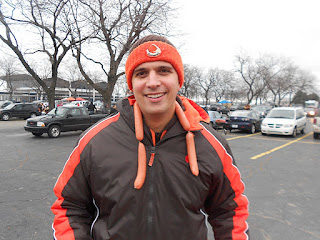 Eventually, snow came to the Factory of Sadness, and I am unsure what to conclude about my first trip to this place.

I guess that the event was a success because our wolfpack had fun. The Cleveland Browns, of course, have been a laughingstock since returning to the NFL in 1999. That followed a three-year hiatus as ridiculously immoral owner Art Modell moved the team to Baltimore.

Email ThisBlogThis!Share to TwitterShare to FacebookShare to Pinterest
Labels: Cleveland Browns, Factory of Sadness, Fred tackled, Know It All