Although I may have started my job search a little late, I have figured out the perfect position for me over the holidays - celebrity alcohol spokesman.

I was a major fan of Bill Murray's character in the 2003 film "Lost in Translation." He traveled to Japan to be a spokesman for Suntory whiskey and promoted the phrase: "For relaxing times, make it Suntory time."

I also have noticed that Michael Imperioli, who played Christopher Moltisanti on "The Sopranos," is doing quality work for 1800 Tequila. He makes a great point in one commercial when he says: "What happened to tequila? These days, it's all velvet ropes and posturing. I don't know about you, but when I drink it, I really like to kick back and be myself." 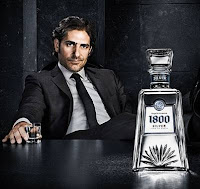 The occupation of "celebrity alcohol spokesman" is rare, and, obviously, that's a shame. Suntory employed Sammy Davis Jr. in the '70s to showcase its whiskey, and he is arguably the most famous alcohol spokesperson.

When I recently explained my plans to be a celebrity alcohol spokesman to a pal, he replied, "I think you're delusional. You're not a celebrity."

Let's not split hairs here. I truly believe the masses would respond to me pointing out some liquor's sophistication. Absolutely. Absolut.