Fantasy world is a nightmare

Snooze Button Generation founder and CEO Joe Stevens insists on doing a blog about the woes of his fantasy football team, despite the urging of his entire staff that repeatedly told him "nobody gives a rat's ass."

"Will you just listen to me!?" a wild-eyed Stevens demanded of his staff. "You do not know the depths of pain I experienced this season. I swear I had the best team in the league, and I didn't even make the playoffs. Do you know how crazy that is?!?"

The staff repeatedly pointed out that Stevens' fantasy football team was not the best because it finished 11th of 12 teams with a 5-9 record.

"You're not listening to me!" Stevens barked. "Only one team had more points than me. I at least was second best. Man, this was demoralizing." 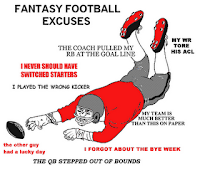 "Exactly!" he said. "When you score 100 points in fantasy football, you're almost assured a victory. The record of the rest of the league when scoring 100 this year was 23-1. My record was 2-3. This is some sort of twisted lesson."

When asked why he took the time to add up the 100-point games in his fantasy football league, Stevens responded, "I was just curious."

When asked why he has put so much thought into this, he said, "It's got to mean something. I guess you realize your true character when bad things happen. Now, it is time for me to see if I can recover from this fantasy football nightmare."

Because he did not sign out of his yahoo login on one of the SBG's computers, the staff looked at his team and realized that Stevens frequently made bad picks with his lineups this year. Stevens also would have been in the playoffs had he won his last game, but he was demolished 122-78.

Not even Jay Feely, the Arizona kicker who scored a mind-blowing 24 fantasy football points on Sunday, would have helped him.