Grimace used to be evil 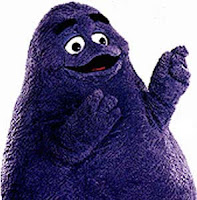 Philosophers tend to focus on the wrong questions. They ponder lame questions like: "Do you humans have souls?" or "Is an afterlife possible?"

The real important questions, though, are: "What the hell is Grimace?" and "Why the hell is he called Grimace?"

Ronald McDonald is a clown, and Hamburglar is a small-time, hungry thief. Grimace is a purple blob and baffles me. Who are you, my purple friend?

The word "grimace" means a frown, or a facial expression of displeasure. Why would this jolly purple guy have such a negative name?

It turns out out that Grimace originally was a villain, "The Evil Grimace." He had an extra pair of arms and stole milkshakes, then hoarded them. ... I love this world. 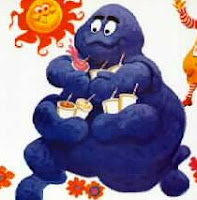 After some crime, Grimace's character was revised to lose his extra arms and be a good guy. He then was part of the McDonald's gang and saw how Hamburglar got his stripes and how once Hamburglar wished everything he touched turned to cheeseburgers.
Posted by Joe Stevens at 9:46 PM