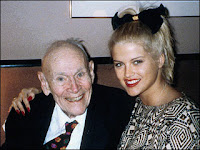 Whenever a celebrity couple breaks up, I have the same reaction: "Damn," I say. "I thought those kids we're gonna make it."

Truth be told, so many celebrity couples look doomed from the start. Brad Pitt and Jennifer Aniston? Marilyn Manson and Rose McGowan? Eh, a lot of these relationships look goofy or fake, and it is no surprise when the couple breaks up.

Enter Anna Nicole Smith and J. Howard Marshall. Now, I thought those kids we're gonna make it. But they didn't - not because of divorce, mind you - because J. Howard died. He was 90. 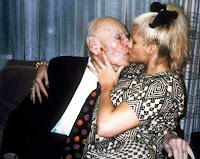 When the dynamic duo was married, he was 89, and she was 26. They met in a Houston strip club and presumably enjoyed a love affair of a lifetime, even though they were married for only 14 months before he died in August 1995. Strangely, he did not put Anna Nicole in his will, and I conjecture he did that because he didn't want to look foolish to his family and business associates.

By the way, J. Howard Marshall was an oil tycoon. His estate today is valued at $1.6 billion.

For the past 15 years, the Marshall and Smith families have been fighting in courts over the estate, even though the two lovebirds are deceased. Finally, this week, a ruling was made, giving the Smiths absolutely nothing.

I wholeheartedly disagree with the ruling. The Smith family should get some of that $1.6 billion. The family was asking for $300 million, and that seems a bit high. How about $100,000 for each day Smith was married to old leatherface? That would amount to $42 million. If that's too high, how about $10,000 per day, or $4.2 million?

Deeper questions arise with the Anna Nicole marriage and the court ruling. This case is far bigger than it seems.

How much is love worth? Is there a price for love? Would you sleep with Skeletor for millions? Why do people assume she married him for money? 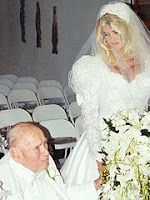