WMMS 'gets down' more than any station 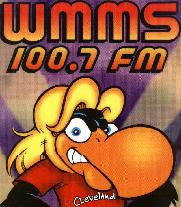 For a long part of my youth, I somehow always listened to 100.7 WMMS at 6 p.m. on Friday. The station played three songs every Friday at that time, "Born to Run" by Bruce Springsteen, "Friday on My Mind" by Earth Quake and "Cleveland Rocks" by Ian Hunter. Cleveland used to be a thriving blue-collar town, and those songs kicked off the weekend for many of my Northeast Ohio compadres.

As the month of Rocktober continues to be celebrated, there is a chance that WMMS: The Buzzard could be the "Greatest Radio Station of All-Time," if that tag exists.

Rock 'n' roll is huge in my hometown, the Rock 'n' Roll Capital of the World, and The Buzzard remains the most distinctive station there. Of course, the station has had numerous make-overs throughout the years, but the fact that I still think of WMMS every Friday must mean something.

Some scientific data exists that might make The Buzzard the "Greatest Station of All-Time." From 1979 to 1987, Rolling Stone named WMMS the "Best Radio Station" (large market). However, for the 1987 victory, the station admitted that it had stuffed the ballot box.

With rock 'n' roll in turmoil, The Buzzard keeps on keeping on. It still plays rock and now is also the flagship station for the glorious Cleveland Browns.

Out of nostalgia for my youth, I plan on listening to the three Friday songs today. Interesting to me, through intense Internet research, I found out that DJ Murray Saul used to do something called his "Get Down" in the mid '70s before the three previously mentioned songs became a mainstay on WMMS.

If you click on "Get Down" above, it certainly sounds like the rantings of a lunatic. I somehow love the rantings.