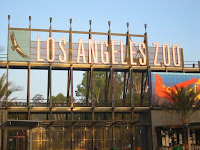 Editor’s Note: Prominent SBG enthusiast Fred “XMan” Stevens unexpectedly passed away on Feb. 16, 2011. He is profoundly missed. The following type of blog entry begins a periodic SBG series called “From the XMan Chronicles” that will recount tales involving the XMan.

Back in early 2007, Sophie Stevens was finding herself as a toddler. Chloe Stevens hadn't been born, and the XMan and my mom figured it would be nice to visit the classy Los Angeles Zoo.

Anyone who knows the L.A. Zoo understands that it's a discount zoo. The San Diego Zoo reigns supreme as a tourist destination in California, and the L.A. Zoo is an afterthought. But what the L.A. Zoo doesn't have in resources, it makes up with frequent protests from animal-rights groups, debris on the premises and quaint cages.

The L.A. Zoo also has a bird show that the XMan absolutely loved.

The L.A. Zoo bird show started with the song "Oh Yeah" by Yello as birds flew to a stage past sparsely populated bleachers. The XMan applauded furiously to this display. 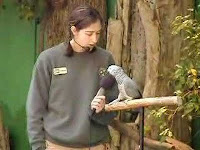 Another part of the show featured the song "I'm Too Sexy" by Right Said Fred with a bird strutting on stage. Out of the corner of my eye, I noticed the XMan shaking his head in agreement to the performance, laughing at corny, Vaudeville-like jokes and again applauding vigorously. Basically, the show was written from the point of view of a clever 5th grader in 1993.

As my mom and I realized the Xman's adoration for this show, it came to an abrupt halt when the zookeeper/speaker said, "We hope you enjoyed the show, folks. And just a reminder that many of these birds here today come from the tropical rainforest, where each year millions of acres of deforestation threaten the birds' survival. We must do our part to ensure a stable environment for these wonderful creatures."

Upon hearing that, the XMan fought back tears and then shed a few as he uttered, "Bird home. Gone. Why?"

For the rest of the day, I made fun of his bizarre tears and pointed out the flaws of many creatures' habitats until he said, "Come on. Why do you gotta make fun of me? ... And, wait a second, what did you say about the polar ice caps?"