A new spin on resolutions

I have heard that New Year's resolutions are for the weak. If you haven't done it by now, are you really going to do it?

Well, touche, cynics, I have a New Year's resolution, and I will be following through with it. I am going to get spinners for my 2004 Volkswagen Jetta station wagon.

Some might ask why I need spinning rims for my wagon. The answer is simple: Style.

For approximately a decade, I have been enamored by rims that move even when somebody's Escalade is stopped at a red light. How does that happen?? Amazing!

No, not in 2011, this is the year I claim spinners for me and my bourgeois brethren. 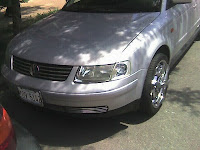 Apparently, spinning rims were invented in 1992 and were in the 1995 movie "Batman Forever." Only the style elite, such as Latrell Sprewell, had spinners back then, and they eventually became mega-popular around 2004.

T.I., Nelly, G-Unit, 50 Cent ... nearly all the top hip-hop sensations have mentioned spinners in their songs, and I can see why. Did I mention that when the car is stopped the rims somehow continue to spin?

I am no scientist. But this defies all logic. If successful with "pimping" my Jetta, I have no idea what I might do next. Perhaps I will purchase a medallion.