Cole is one heartbroken dude 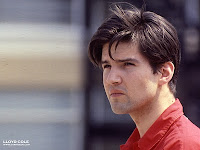 "The more I learn, the less I know. Could you make mine straight Absolut?"

Man, I could think of a zillion Lloyd Cole lyrics that resonate with me, but that one comes to mind. Maybe I need a drink.

I am a big fan of Lloyd Cole not because he is pretentious, but because he is a smart, heartfelt songwriter and that is hard to find. Today, he turns 50, and apparently, aging is an unstoppable, natural part of life to singers the Snooze Button Generation likes. Not too long ago, Paul Westerberg also hit 50.

The biggest problem with love songs, and romantic comedies, AKA chick flicks, is that often times, they focus only on no-doubt-about-it simple love. Is that how love really is? Maybe no-doubt-about-it love exists, but it's not always that simple. Is it?

To me, a good love song or chick flick takes into account some of the complexities that make up a human being and love. And that's why Lloyd Cole is such a winner. 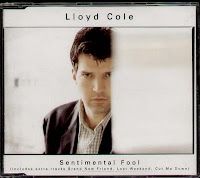 The song "Are You Ready to Be Heartbroken?" is one of his most well-known tunes, and that's deservedly so. How many songs can focus on the connection between love and vulnerability in a moving way in 3 minutes, 5 seconds?

"Sentimental Fool," "Mr. Malcontent," "Undressed" and most of the songs from a compilation titled "Lloyd Cole & the Commotions: 1984-1989" are examples of high-level songwriting that are worthwhile.

Of late, Cole has been erratic with releasing new songs and albums. Unlike Westerberg, Cole's newer work doesn't seem to have as much value, though his 2000 album with the Negatives was solid. Maybe he's heartbroken, and he's finally tired of singing about it.