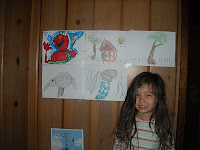 A 5-year-old girl from Long Beach, Calif., is making an impact in the art world and could create bidding wars for her innovative art, the Snooze Button Generation has learned from a source.

Sophie Stevens, 5, has been dabbling in realism, abstract impressionism and surrealism since she was 2 and has developed some fans. She creates her art in mostly marker on paper but does not shy away from other less-conventional materials, including cotton balls, straws, seashells and grocery-store stickers. 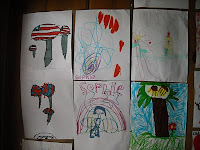 "Look, I'm not going to comment on Sophie's artwork," Snooze Button Generation founder and CEO Joe Stevens said. "She's my daughter, and drawing and coloring are part of her development. I don't want to put any pressure on her to be some sort of world-class artist. I want her drawing to be completely healthy."

An obvious comparison to Sophie is "child prodigy" Marla Olmstead, the subject of the 2007 documentary "My Kid Could Paint That." Olmstead obtained international media attention by age 4, and her work has sold for more than $300,000.

Sophie refuses to sell any of her artwork, but she says she will take work on commission. 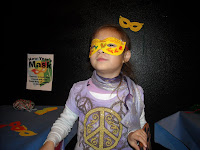 Sources also say that Sophie's younger sister, Chloe, is making an impact in the world of performance art. Chloe, who turns 3 tomorrow, did a seminal performance in March that involved a bubble machine and bicycle helmet.