That doodle can't be un-did, homeskillet!

Six weeks ago, I engaged in the following conversation with an older member of the Snooze Button Generation.

Friend: Did you do anything last night?
Snooze Button Generation: Not much. I got stuck in the web of YouTube, and by the time I got out, it was too late to go out.
Friend: Really? What do you do on YouTube?
SBG: Well, I was looking at Norm MacDonald videos again, and then I found some web-only show Tom Green did ... Wait a second. Do you ever go to YouTube?
Friend: No. But I've been meaning to.

Whoa, whoa, whoa. Really? I may be a bit out of it in some regards, adding unlimited texting to my cell phone plan only a few months ago, for example. But apparently, some SBG members surf the Web but do not experience YouTube. It's kind of like having sex, but not experiencing an orgasm (though I've had girlfriends tell me that's OK. Really? Well, OK then, I'm going to watch the game now.).

Anyway, I had that "how did I not know this?" feeling when I stumbled across urbandictionary.com the other day. How had I never encountered it until then?

He is so sapiosexual that he wanted to cuff the carrot we he saw her sideboob. 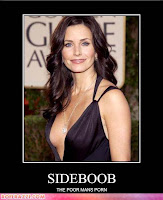 Without Urban Dictionary, I might not realize that someone who is sapiosexual finds intelligence the most sexy trait, and a sideboob is the sight of a clothed breast.

That's one doodle that can be un-did, homeskillet!

At Urban Dictionary, I also saw the half-your-age-plus-seven rule in print. Some say it is only appropriate to date someone half your age plus seven. Thus, if a 36-year-old dated a 24-year-old, that is inappropriate by one year.

I also saw "dejabrew" in print, though I think it should be "deja brew." Why is it I sometimes have the same thoughts or memories, only when I've been drinking? Well, those are obvious cases of deja brew.