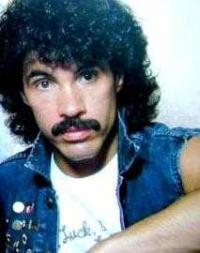 I consider myself an open-minded individual and do not like to judge people. However, sometimes my intuition overtakes me, and I make a judgment, a subconscious judgment.

That's what happened with John Oates, one half of the famous duo Hall & Oates. I involuntarily made a judgment about Oates and assumed he was gay. Perhaps Oates' tendency to wear leather vests without shirts, or perhaps his porn-tastic mustache, told me, "Yowsers, he is totally gay."

I felt that Oates was not only gay, but he and his music could be celebrted at gay pride events, kind of like that song, "Born to Be Alive" by Patrick Hernandez.

Of course, I have no problem with anybody's sexual orientation. In fact, with Oates, I was the opposite and reveled in his gayness. He was here. He was queer. And I was used to it.

Well, it turns out that OATES IS NOT GAY. I am still wrapping my head around this shocker. I heard this rumor and then researched it by going to http://www.johnoates.com/bio.html where I read: "He resides with his wife and son in the rocky mountains of Colorado on their ranch along with three dogs, a flock of emus, llamas and alpacas."

Sure, a chance remains that this is fiction, and he is joking about not being gay because he is the gayest man alive. But, apparently, he is straight, no longer dons a mustache and lives with exotic animals.