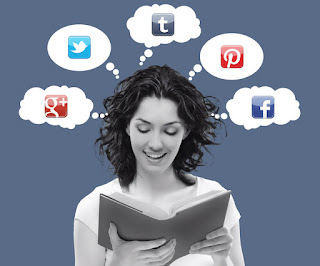 Not too long ago, the family and I watched the 1984 movie Splash with Tom Hanks and Daryl Hannah. Y'know what? It holds up. It's still funny, entertaining. Not bad.

The odd thing, though, was that I noticed every little detail of the movie, not like when I saw it years ago. It became obvious that what we watch today is much more fast-paced, and we consume much more video. It's not possible for me to notice every detail of every frame with modern movies and TV because they just move too fast.

Our collective brains have transformed because of the digital age we live. Our capacity for what we take in has expanded, and there are downsides, such as a lack of our depth of understanding and our reliance on images. I recently read Reader, Come Home: The Reading Brain in a Digital World (2018) by Maryanne Wolf, and it helped me understand the ramifications of reading in the digital age and make a persuasive argument for the importance of reading full-length books.

One shocking statistic in Reader, Come Home is that the average person encounters 100,000 words per day. That's a full-length novel. It's not as if the average person actively reads those words. Oh, no. The vast majority is just scrolled past and hardly pondered, if at all. We have digital brains now. 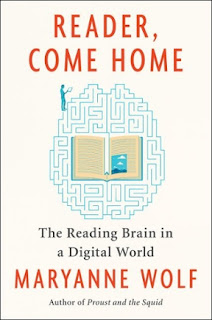 The ramifications of the changes in our brains and the lack of extended reading are enormous. Empathy suffers, and we end up craving snippets and scrolling. Actual life and human interaction may feel boring. Although the book delves into the science of what happens to the brain when we read, I found the strength to be how Wolf just makes an argument for reading by calling upon Aristotle, Derrida, Heidegger and countless other big thinkers in an accessible way.

Heidegger argued that man's special nature is to be a reflective being, but as the masses face so much fast-paced, non-contemplative images, could we be losing what it means to be human? So I highly recommend Reader, Come Home. It kicks off a list of 10 books I've read this past school year that I also recommend.

Perhaps this will be the format for my book recommendations. I'll do them toward the end of the school year, similar to last year. This will build off the Top 100 Nonfiction Books I Recommend project from 2019. My other recommendations this year are: 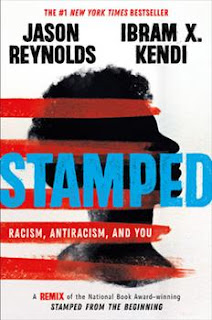 Stamped: Racism, Antiracism, and You (2020) by Jason Reynolds and Ibram X. Kendi

This is the remix version of the 2016 book Stamped from the Beginning, and it was much more entertaining than I anticipated. That was a surprising feat, considering the heavy content.

Stamped, the remix, captivated me, and I devoured it in a couple days. I couldn't put it down. I often wonder if we will keep teaching myths to our youth about America's past and call it "history." Do we properly address the consequences of slavery? Do we address shielding the facts that George Washington and Thomas Jefferson each had more than 600 slaves? Stamped is just so accessible and truthful that it deserves the accolades it receives. 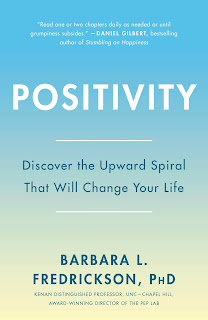 As a Gen Xer, living on this planet for nearly five decades, it's hard for a book to improve my outlook on life, but this one did. So often, I hear "be positive" or "look on the bright side." Uh, how? What does that entail?

Fredrickson promotes the idea that we should strive for three positive thoughts or actions to each negative one. Negative thoughts and negativity creep into all of us. Hey, man, we're human beings, and we're honest! However, striving for positivity, or as I call it "realistic, authentic positivity," can happen. 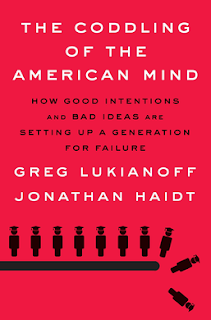 The Coddling of the American Mind: How Good Intentions and Bad Ideas are Setting Up a Generation for Failure (2018) by Jonathan Haidt and Greg Lukianoff

This book reads well, but what stays with me most is how Haidt and Lukianoff list common thought disorders, such as catastrophizing, overgeneralizing and dichotomous (black and white) thinking, and how these used to be individual disorders. Now, those disorders have affected masses of people, and the divisive and unhealthy Interwebs reinforce them. 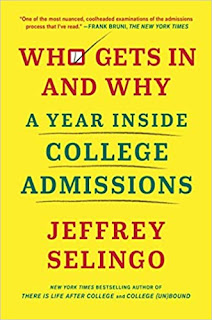 Who Gets In and Why: A Year Inside College Admissions (2020) by Jeffrey Selingo
A lot of parents, and students, get stressed and have an all-around horrific time when it comes to picking a college. Does it really have to be that way?
Selingo's book pointed out a bunch of college admission myths and explained some things I didn't consider. While the masses flock to brand-name colleges, many unsung and lesser known universities offer world-class educations, too. Another good point was that, statistically, student-loan debt is so astronomical because of post-graduate degrees, not undergraduate ones. I've also read There is Life after College by Selingo, and I recommend that too. 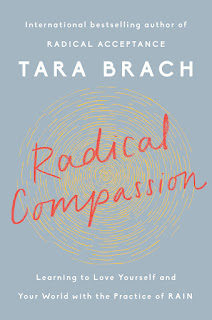 I've also read Radical Acceptance by Tara Brach, and I have mediated alongside her podcast. These books help me feel better by having me look inward and get out of my head. Global sensation BTS might sing "Love Yourself," but, uh, what does that mean? How? Well, Tara Brach helps! 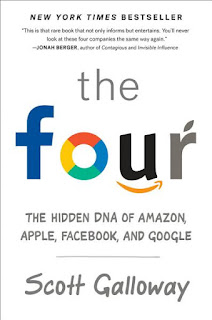 The Four: The Hidden DNA of Amazon, Apple, Google and Facebook (2017) by Scott Galloway

Galloway has been a huge media personality for a while now (see video below), and I love his bluntness and humor. We live in such a tech-heavy world that I felt The Four set me straight on just how crazily powerful Amazon, Apple, Google and Facebook are. Insane.

Tons of tidbits about business are in The Four that I loved, such as Galloway's three keys to business success: 1) emotional maturity, 2) curiosity and 3) ownership of your task, project and business. 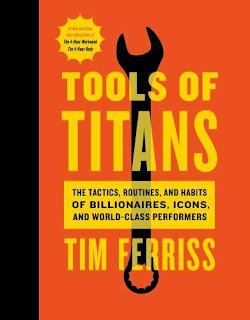 In the same vein as Tribe of Mentors by Ferriss, the book interviews "successful" people in all walks of life, especially business, and looks at their routines and the obstacles in their paths. The reoccurring themes that come up are how many exercise to start their days, practice mindfulness or mediation and adapted and learned from crucial failures. 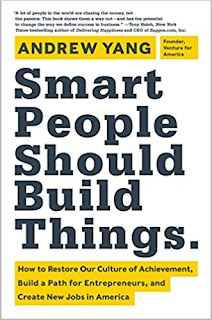 Why in God's name would you go to law school in the 21st century? This is one of many thoughts that come up in Yang's book. I mean, only 20 percent of law-school grads actually practice law. That number alone makes law school look like a grand waste of time and tuition. And, yes, this author is the former presidential candidate who is running for mayor of New York.

Elite students get sucked into Wall Street jobs or go to law school and don't really help our country grow or create jobs. Yang's premise is to move elite students to entrepreneurial jobs. He even created pathways to get such elite graduates to midsized cities, including my beloved Cleveland. I must admit that he has a point, and it would nice to see the driven of our world actually help others, whether it be through business, social services or something other than Wall Street and law. 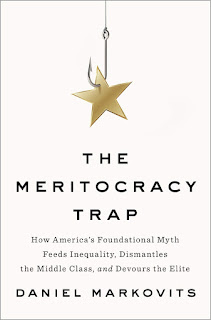 The Meritocracy Trap: How American's Foundational Myth Feeds Inequality, Dismantles the Middle Class and Devours the Elite (2019) by Daniel Markovits

This barely makes my list because it took long to read, and the books repeats its premise so much that it becomes funny. Look, I get it. To think that the United States is a meritocracy is a joke. It isn't. We have a zillion ways to show how it isn't a meritocracy. Got it.

I found the parts on how the myth of meritocracy devours the elite to be most interesting. The elite live in an odd culture of overworking, stress and proving themselves. Wha' happened?

What about working your tail off, but then enjoying life with leisure and possibly contemplating life? The unreported, sad truth about our billionaire-based 21st century economy is that we have developed an unsustainable, work-heavy culture.

Billionaires and millionaires might want to believe they got to where they are through merit. But we all know this is false. Perhaps it is important to admit that it's nice that 'Merica strives for a meritocracy, but in reality, we are just falling in line with the structure that landowners and slave owners Thomas Jefferson and George Washington laid out about 250 years ago.