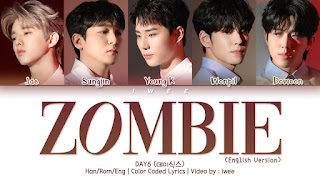 The Snooze Button Generation blog has named Zombie by DAY6 the top K-Pop song of 2020.

"Look," SBG founder/CEO Joe Stevens said. "It's my favorite song of the lot. It's well-written and smart, and it doesn't hurt that Jae went to my high school."

Stevens was referring to Jae Park, who is a key member of DAY6 and graduated from Cerritos High School where Mr. Stevens teaches.

Zombie edged out many excellent K-Pop tunes from 2020, and Stevens remarked: "This is the best K-Pop list I've seen. Right on the money. Take that echo4ever!"

Echo4ever is the YouTube channel and group name of Stevens' daughters, Sophie and Chloe, and cousin Ellie. Sophie and Chloe each created videos for their top 20 K-Pop songs of 2020. Feel free to check those out by clicking on their names, and subscribe to their channel by clicking here. They post content every other Saturday; the music videos especially are excellent.

Stevens explained that K-Pop has taken over his household with music, videos, random dance challenges and more. "I definitely have my favorites," he said. "I thought I liked the girl groups much more, but based on this top 20 list, it's not as much as I thought. Happy New Year! How you like that?"

I love the tone and thought behind the tune, how the protagonist is closed off emotionally. It's deeper than a typical pop song.

EVERGLOW doesn't have a whole lot of killer songs, but the group killed it with DUN DUN. But I must admit that the song in my house eventually felt overplayed on the random dance challenges.

From my perspective, Loona is the best girl group in K-Pop. This song reminds me of John Sondej's bar Dick's Den in Columbus, Ohio, that had the slogan: "Dick's Den. Why Not?"

One of my complaints about boy groups is that they are too whiny and not fierce. Oh, that is not the case with Stray Kids and this song.

I wonder why there aren't more groups that combine boys and girls. For my money, KARD is the best one that does that. 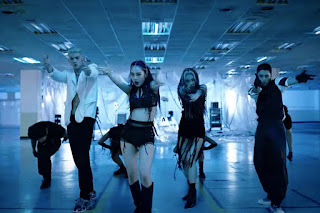 6. Not Shy by ITZY
I love groups that shout out their band name in the middle of the song. It would have been impressive if the Beatles or Rolling Stones or Guns 'N' Roses had done that.

I recognize that BLACKPINK is way more popular in the U.S. than a lot of other strong girl groups, but as Loona might say: So what?

If I have a song stuck in my head for days, that must be a good thing. You win, Monsta X.

Yes, this is overplayed and in commercials, and BTS has taken over the world. But it's a great song!

Even before I knew she had a solo career, Hwa Sa from Mamamoo became my bias. She remains my ultimate bias. 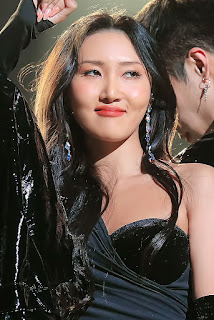 I'd love to hear this song in Church.

He reminds me of the Korean Justin Timberlake.

Maybe the lyrics could use some moderation, but apparently, they're never enough.

CHUNG HA is a queen, though Hwa Sa remains my ult.

I like to think this song is about politics. 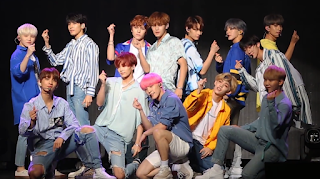 Not sure what the song is about, but it sounds cool.

It appears to me that all ONEWE songs start boring, then gradually get epic.

I like to pretend they're saying "Don," and this song is about the Cerritos High School Dons.

I'm not sure how this song isn't titled Forever Young, but OK.