Happiness is the path 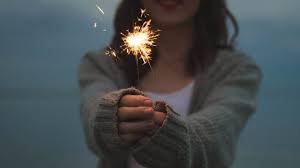 As we get older, it may be natural to become set in our ways, creatures of habits. No need to waste time with things we don't enjoy. At this point, we know how to maximize our lives and experience meaning and fulfillment on a daily basis. Right?

Or maybe we're just mindlessly scrolling on a device or streaming videos, oblivious to the power of Big Tech.

Either way, when I look at the big picture, I feel for my fellow man because I see a lot of misery around me. Millions of lost jobs. The George Floyd murder. Rioting. Looting. Even with this backdrop, I believe it is possible to fight the good fight for social progress while being happy. But, man, how do we stay "happy" in this difficult time?

Before we get into happiness, let me say that I urge white people to at least educate themselves on the systemic racism inherent in the United States and then make it their life's mission to end it. In my 100 Nonfiction Books I Recommend project, I recommended to The New Jim Crow by Michelle Alexander, White Fragility by Robin DiAngelo, So You Want to Talk About Race by Ijeoma Oluo and many other books that tackle systemic racism.

It's important for whites, myself included, to understand that they know way less than they think about racism and they owe it to themselves and society to grow and bust their butts to be what Kendi X. Ibram calls antiracists. It's with this crucially important backdrop that I shift to the topic of happiness. Is it possible to be happy while tackling a system that still perpetuates racism?

I'm not in charge of anyone else's happiness, other than my own, but at least I'll throw out some ideas.

Now, you might say, "Joe, come on, we're facing the unprecedented coronavirus and now rioting. We're all miserable. It's reasonable to be miserable now."

To that, I say the coronavirus magnifies existing problems. With 374,000 worldwide deaths and 106,000 deaths in the United States, this magnifies the medical, political and economic woes that the United States puts on display on the daily. Sure, this has been a difficult and painful time. But isn't it best for ourselves and society, if we pursue happiness in the face of this pandemic.

Heck, if we say the coronavirus trumps happiness, then couldn't we also say that about the prison system, health-care system, wealth inequality, racial inequality, school shootings, climate change and just about any serious problem facing our world?

The type of "excuse logic" to not be happy is an individual's choice. But the problem is that once a typical American accepts the premise that "yes, it makes sense to pursue happiness," then that person likely will have no road map for that and equate happiness with binge watching and eating sugar food.

It turns out that happiness is not a destination. It's a process. It's not as if "OK, if I just attain this, I will be happy." Happiness is the path.

Now, I'm defining happiness as meaning, fulfillment, contentment. It's not about being all smiles like in Pharrell's song "Happy" or the glee of the overweight class at Disneyland. No, happiness to me is to know that one is on path of happiness. Yes, major obstacles and difficulties arise, but at the end of the day, life is beautiful and a miracle. It's a shame to waste it on binging and bon-bons. 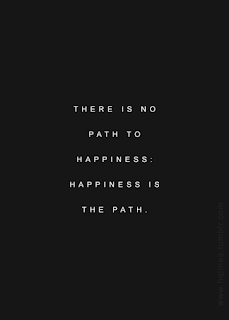 Unfortunately and ironically because the phrase "pursuit of happiness" is in the Declaration of Independence, seeking genuine happiness is counter to American capitalistic culture. Americans are exposed to an estimated 4,000 to 10,000 ads per day (and that likely is an underestimate, by the way). Nearly all of these products prey on the idea that happiness will be attained if they are bought; that's obviously a false premise.

I actually don't mind Nike's omnipotent slogan "Just Do It." However, imagine if that were "Just Be."

Something else I've discovered about happiness is that it is intertwined with health and growth, or education if you want to call it that. I repeatedly talk about the importance of our social, physical, intellectual, emotional and spiritual health with the acronym "spies." It's not impossible to be on the path to happiness with difficulties with one, or more, of the elements in spies, but it's ideal to be on a healthy path with all five.

As schools switched to online learning during this shutdown, it underscored the fact that learning is a process and not an outcome. Of course, that is a "no duh" statement.

I always have seen learning and teaching as the heads and tails of the same coin. Both need to be progressing or growing, or it doesn't work. If the teacher isn't learning, how in the world could the student be?

The noble profession of teaching not only warrants, but demands, growth. The tricky thing with teaching growth is how varied the approaches and mindsets of teachers can be. In a way, one positive of the coronavirus school shutdown is that it has forced teachers to try different things and grow — hopefully.

For me, I find that growth, AKA education, and health are an inherent part of the happiness equation. But before I realized that, I had to truly understand the basic idea that happiness was not something to longed for or pop up through happenstance. It is a focus, a passion, a pursuit. Some people call it "life," and it turns out that it's beautiful even with everything we face.

Email ThisBlogThis!Share to TwitterShare to FacebookShare to Pinterest
Labels: education and happiness, happiness is a process, Nike, Wayne Coyne This I Believe