Silver balls: It's Christmas time in the city 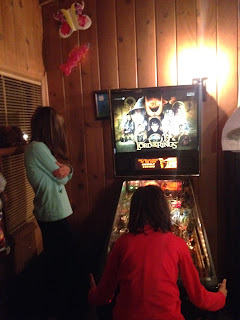 "The dead are coming!"

"Mr. Frodo is not going anywhere without me."

"Get a hold of yourself!"

These phrases have been bouncing around my household of late as I have obtained a 2003 Lord of the Rings pinball machine. To have a pinball machine of this magnitude in my home fulfills some sort of childhood dream, and it has been a pinball-filled holiday season for me and the girls.

In lieu of Christmas cards, I now simply write this blog, figuring that those who would like to connect with me can easily do it by reading this. In other words, I am a bit lazy when it comes to Christmas cards and holiday family photos, and I prefer the Snooze Button Generation platform.

Actually, I plan on having an SBG entry every year from now on around Christmastime, but I have only done it in 2012 and 2009. It might be nice for me to count my blessings and wish good cheer to all, but instead, I must recount the happenings of Nov. 23, 2013, to explain how Lord of the Rings pinball is in my home. I have verbally told this story to a handful of friends, but now, it is my Christmas card. 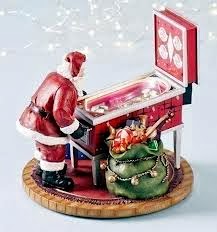 Something magical was floating in the air on the glorious Saturday, November 23. I felt excellent, had a quality espresso at Portfolio Coffeehouse and figured I'd take my car to a tire specialist to have a pesky slow leak fixed. When I took in the car, I asked how much it would cost, and the answer was "nothing." I made sure that was the case, and the man said, "No worries. We got this." ... Wow!

I successfully had sushi at a place aptly called "I Luv Sushi" in Lakewood, Calif. As I finished the sushi with my girlfriend, I made a random suggestion by saying, "Hey, do you want to play pinball across the street?" Because Cal Bowl, an enormous bowling alley with an arcade, was extremely close, we went there, although she was not enthused.

Again, a day of success continued. Only three pinball machines were in the place, and the first one we encountered, The Simpsons, had a free credit on it. We played that credit.

The game functioned, and I texted my friend, Skydog, who recently bought a machine. His Adams Family machine was way more expensive. I quickly went to ebay.com and found that Lord of the Rings goes for much higher than a mere $600.

Pinball plays a minor role in my life. I loved to play in college. My mom has an old machine, Top Hand, at her Polish mansion. And, now, it is back in my house and life, big time. 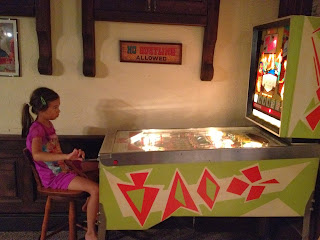 I am sure that my glee for "Lord of the Rings" will wear off soon, but right now, I am loving this machine. However, when a machine is marked down so drastically in price, there are reasons for that. I have put a few hundred bucks of fixes into it, and, luckily, I have discovered a kind and semi-retired pinball fix-it man. He is ready in a moment's notice to help me if problems arise with the machine.

The 2009 documentary "Special When Lit" examines a subculture of folks who love pinball. I like it, but I am not as hardcore as the geeky enthusiasts in the movie. I can't explain exactly why I love pinball. I think because it is so tactile, and it brings back memories to when I played World Cup, Twilight Zone, Adams Family, The Shadow and many more in college.

My pinball fix-it man explained to me that pinball machines are absolutely impractical. They can have problems daily, and they probably only bring in about $30 each week to arcades or wherever they are.

Yes, pinball is a dying pastime in America. But I have a slight piece of Americana in my home, and this one is modern enough to have multiball.

Happy holidays. Merry Christmas. And, guess what? The extra ball is lit!