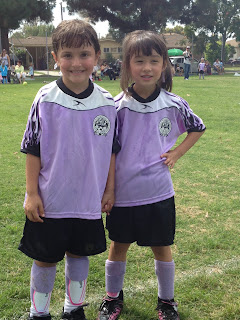 Phew! I made it to December. Thank God!

I am not the type of person to count down the days to something new, but this past November presented difficulties to me because of the unfortunate and painful end of the Lavender Ladybugs. I found myself crying - yes, literally crying - in the bathroom of a place called Frog's Bounce House, and when that happens, something has gone drastically wrong.

The Lavender Ladybugs were a tight group of 11 kindergarten girls that featured my youngest daughter, Chloe (pictured on the right with her best friend). I coached the team, and I enjoyed it way more than I thought possible. I vaguely got into the mind of 5-year-old girls and enjoyed the experience of thinking about unicorns, rainbows and princesses.

We had a vibrant team with supportive parents, great assistant coaches and a dedicated team mom. I contend that we were the best team in the league because we had a lot of fun and nearly all of the girls looked forward to our practices and games. Also, we were good. Every girl scored during the course of the season, and more than half of the girls plan on playing for sure next season.

We even had a catch phrase promoted by me. It was simple: Soccer is awesome! (TM)

On the final weekend of the season, things took a drastic turn, and I was extremely hurt. It happened to be my daughters' weekend with their mom. For our final game on Saturday, Chloe was a no-show. Later in the day, Chloe's best friend (pictured on the left) had a birthday party in which the entire Ladybug roster was invited. Chloe was not taken to the party.

For the next day, the Ladybugs had our final season banquet at Frog's Bounce House. Despite my offering to pick up Chloe (as I did for the other events), Chloe again was a no-show. I gave out trophies to the other girls, but I had to give mine to Chloe when I saw her Monday after school. By the way, Chloe was uncharacteristically sick for school Monday and Tuesday following the weekend stress. 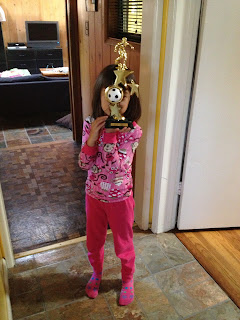 The purpose of this blog post is one last effort for me to put the pain of that November weekend behind me. I felt wronged. But what hurt even more is that my daughter, Chloe, was wronged.

Coaching the Lavender Ladybugs was an effort to add more normalcy into my daughters' lives, and it worked for a while. It all came crashing down, and I realized a lot about the reality of the situation that I am living.

OK, yeah, the holidays await. A Christmas tree was put up this weekend. I also put up 1,320 Christmas lights on the outside of my home. I had never put outdoor holiday lights out until now, and they are classy.

I appreciate Snooze Button Generation Nation for taking the time to hear the tale of the Lavender Ladybug drama. Now, it's time to embrace the holiday season and continue to love my daughters as I do.
Posted by Joe Stevens at 9:23 PM