European connections spurred on by cocktails 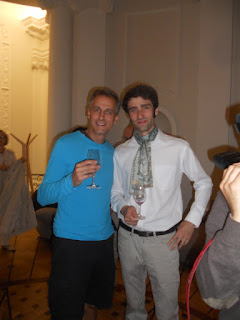 Many Americans are afraid of the French. Frequently, I've heard this phrase: "Paris is beautiful, but the French are so rude!"

I have never found that to be the case and in a recent trip to Spain and French, befriended a glorious artist named Augustin. He is very cultured and wears ascots.

As I dined with my girlfriend in various French restaurants, I prepared a speech to French servers if they ever were rude to either one of us.

My speech was this: "Listen, Frenchy, we gotta meet halfway, and you must follow my three rules. Number 1: You gotta cut the French b.s. Number 2: You must get us some goddamn creme brulee, and Number 3: You gotta stop pretending you don't know what I'm talking about."

Luckily, I never had to present these three rules to any of the evil French.

When I ran across Augustin Frison-Roche, it was at an art opening of his in Bordeaux. I quickly discovered that not only was there art at his opening, but there was free wine. After about three glasses of this wine, I explained to him that not only did I love his ascot, but I loved the free wine. He looked confused as to who exactly I was and in French, most likely responded, "Who the hell are you?"

Ah, that Augustin -- what a kidder! 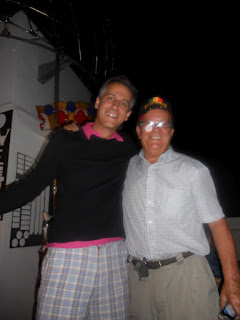 Strangely, I had a similar experience in Figueres, Spain, Salvador Dali's hometown. Staying at the Hotel Plaza Inn, owner Joaquin Falgas has a by-invitation-only party on the rooftop of his hotel every Saturday night. One look at my girlfriend and me, and, of course, we were invited to the party.

On the rooftop, overlooking the Dali Museum and Spain countryside, Joaquin thrust beer after beer at me and wine to my girlfriend. He gave us fish and shrimp. As we consumed, I realized that my perception was getting hazy, and I took several photos with Joaquin. This experience with Joaquin was much different, though, because unlike Augustin's odd French, I actually knew what Joaquin was saying in Spanish.

Most people rate their European trips based on the free drinks they receive, and for me, my voyage was topnotch. I also saw Barcelona, Bilbao, the running of the bulls in Spain and San Sebastian, but I must give it up to Augustin and Joaquin for the cocktails.