The Real Housewives of Parma Heights 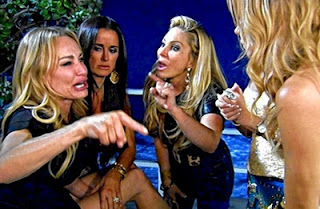 Although we have no official TV deal, it is obvious that my family can easily have a reality show called "The Real Housewives of Parma Heights." Technically, none of my relatives are housewives in Parma Heights, Ohio, but my brother and his bride, Judi, live there, so that might work.

Many similarities exist between my housewives in Parma Heights, and "The Real Housewives of Beverly Hills." For example, a stir was made when a Beverly Hills housewife revealed that she bought sunglasses for $25,000. The other day in Venice Beach, Calif., I successfully bought $9 shades, after talking a vendor off his ridiculous asking price of $10.

While the Beverly Hills housewives have argued about infidelities, tackiness and plastic surgery, my brother recently engaged in a brief debate with my girlfriend regarding the game Monopoly. This is what ensued:

Because of the salaciousness of that above conversation, I am certain viewers would tune into "The Real Housewives of Parma Heights."

Lucky viewers also might see debates on homemade cakes vs. store-bought ones, the ladies getting their nails done in a Vietnamese-owned shop in Long Beach and the use of aerosol spray cans for deodorant.

Watch what happens live! ... Only on Bravo.