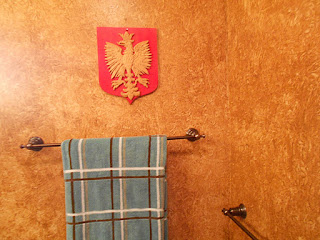 Today is "Thanksgiving Eve." It is the busiest day in grocery stores across the United States, the busiest travel day of the year and a time when many of us should get busy.

In the Stevens family, it may be a difficult time because we are beginning a holiday stretch in which the XMan somehow will not be a physical part of things. Although the XMan's death was the worst thing that ever happened to Snooze Button Generation founder and CEO Joe Stevens, the death spurred on a couple successful household tasks including the installation of two towel bars (see above photo).

Of course, the biggest manifestation of grief through tasks is Stevens' magnificent Chewbacca collection, which ballooned as he grieved. There have been other successful tasks, too, including the procuring of a baby grand piano and 10-person poker table, installation of an outdoor dartboard in a cabinet, new shower heads, furniture and an underwear/sock upgrade program.

Yes, Stevens has been mourning through tasks and home improvement, and that may sound bizarre because he and his father are/were no handymen. 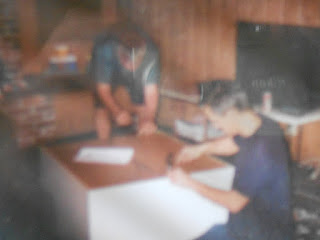 The faded photo above, for example, is a joke photo because once Stevens and the XMan put together an IKEA dresser. Obviously, they opted not to use the directions, which are for suckers, and put together a wobbly edifice featuring necessary spaces and slants between the drawers.
As Thanksgiving Eve continues and the holiday season kicks off, Stevens is hoping that this blog entry serves as a way for him to feel slightly better about the Stevens family's fate and not bring down those around him as he continually thinks about the XMan. The XMan loved the holidays as much or more than he loved the song "Love Shack," and Stevens will attempt to love them as well this year. He might even put up a few more towel bars, which he claims are perfectly straight in real life but the photo makes them look crooked.
Posted by Joe Stevens at 11:46 AM