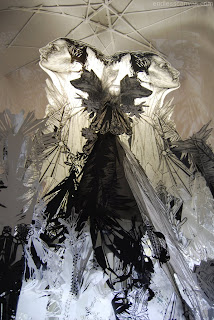 When I used to think of street art, I used to think of graffiti, the movie Exit Through the Gift Shop and Banksy. However, when I visited the "Art in the Streets" exhibit at the Museum of Contemporary Art Geffen in L.A. this summer, Swoon changed my view.

The artist nicknamed Swoon (who is actually named Caledonia Dance Curry) was one of the many contributors to the hip 'n' awesome exhibit, and I had the biggest reaction to her work as opposed to the other loud and colorful work in the exhibit.

Although I do not pretend to be an art aficionado, I do know that relevant art exhibitions that interest people outside the art world aren't common nowadays. "Art in the Streets," however, was relevant, and I think its scope goes beyond only the troubled and confused art world.

With hip hop blaring, skateboard videos in one room and huge street art throughout the MOCA Geffen, "Art in the Streets" had spunk and fun. Swoon's art, however, transcended the exhibit. 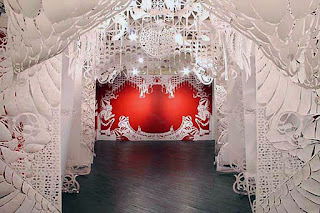 Perhaps Swoon took into account the space at the Geffen while the other artists simply did what they normally do and hoped for the best. But Swoon's "Ice Queen" (top photo here) was simply breathtaking. It filled the entire room and sent chills down my spine.

Some might say the "Ice Queen" was out of place at the gritty street art exhibit. But I don't think so. It contrasted so much with the other art that viewing it there gave it a bigger impact.

In a major juxtaposition, the art outside the Swoon exhibit was from former skateboarder Ed Templeton, who had one photo of himself holding his naked erection. Maybe anything would have looked good compared to that photo, but, no, "The Ice Queen" truly was ephemeral and amazing.