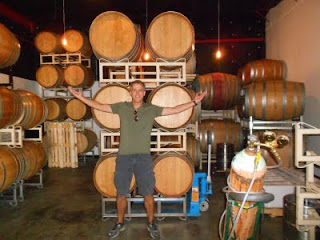 I asked myself a critical question last weekend: "Can a normal human being become a wine connoisseur in a mere weekend?"

Well, the answer is "no." But when the human being is me - a Polack from Cleveland - and when the weekend is Labor Day weekend, it is possible. And, yes, I now am a wine connoisseur.

The final six in the above list were in the Lompoc Wine Ghetto, which is in an industrial park. I liked those the best.

During this wine-crazed weekend, I tasted 105 (this is no exaggeration) wines. Is that possible, you might ask? Well, it happened. Of those 105, I tasted 96 of them and actually drank nine of them. 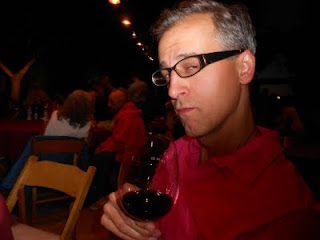 Obviously, wine tastings are ridiculously detailed. If someone put as much focus in any other drink or food item, such as having a "soft drink tasting," everyone would laugh. Perspective can often be lost during wine tastings, and they can be hilarious.

At the Palmina wine room, for example, the guy pouring the wine verbally assaulted my sophisticated lady friend when she washed out her glass with water. "Don't you understand you just messed up the pH balance?" he said aghast as he rolled his eyes.

A few moments later, I asked him, "What is your stance on ice cubs in reds? Yeah or nay?"

Up until this past weekend, the most information I ever got on wine was when I saw the 2004 documentary "Wine for the Confused" with John Cleese. I loved the movie. It proved that nearly all serious wine drinkers could not tell the difference between a white or red wine when blindfolded and that serious wine drinkers also could not tell the difference between expensive or inexpensive wines.

In Santa Barbara, I did discover that I like lighter and smooth red wines, typically Pinot Noirs, and that I like white wines that are not quite as dry as Chardonnays, but not quite as fruity as typical Pinot Grigios. I like something in between those two.

Am I a pretentious wine snob now? No, I am not. But I can pretend to be.