'They can't seem to get control of the ball!' 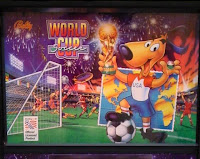 I am not the best pinball player in the world. But I am in the top 10.

At least, that's what I used to say in the mid-1990s when I was an avid pinball player and multiball specialist. I still love pinball but rarely play. In Long Beach, Calif., hardly any pinball machines are in town, and nearly all of them are broken down. I suspect that's the case in the majority of America's metropolises.

I am thinking about pinball again because of the 2010 FIFA World Cup, which isn't really about soccer. No, like all World Cups, this year's World Cup is an homage to the 1994 Bally pinball game World Cup.

Dang, that World Cup pinball machine was smooth, exciting and my favorite of all-time. Others might say Twilight Zone (1993 Bally) and Addams Family (1992 Bally) were the best of all-time, and there is even an extensive list that claims this as fact.

While Twilight Zone and Addams Family are cooler than World Cup, they don't play better. However, I must admit there is a chance the World Cup game can be immediately eliminated from all conversations because of the goofy-ass dog in it, Stryker, the 1994 World Cup mascot.

But, no, World Cup is the best pinball machine ever because its purpose makes sense (beat the other teams and win the World Cup!) and there is no wasted space. Pinball is about three senses - vision, hearing and touch - and the sounds are especially good because a sports announcer critiques the play.

"How did he make that save?"
"They can't seem to get control of the ball."
"What a shot! What a powerful shot!"