Uncle Ed is better than Federer 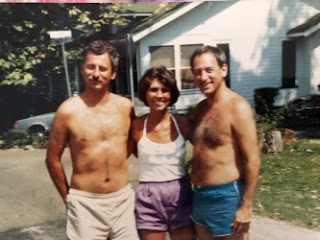 That is the trio pictured. My dad, Fred, is on the left with the mustache.

This is taken in Chippewa Lake, Ohio, with the Stevens cottage — 42 Bungalow Bay — in the background. The photo is likely in the middle of a tennis match. Tennis courts are directly to my dad's right.

Spending many summer days in Chippewa, this trio engaged in many grueling tennis matches. They were great players, and my Uncle Ed and Aunt Lynda continue to be quality players to this day.

It will likely sound like hyperbole, but Uncle Ed is better than Roger Federer.

Now, you might say that is a stupid claim because Federer has 20 Grand Slam titles and was No. 1 in the world for six years. But, come on, he is BORING. As a casual pro tennis fan, I have avoided watching Federer for years. Too robotic. Yawn.

Uncle Ed, on the other hand, has Federer beat with longevity, style and charm. He's logged in more years on the court than the Swiss mister and was not afraid to play shirtless in humid Ohio summers in the 1980s. One commonality he shares with Federer is that I am not sure I beat either in an actual match.

But, really, my serious point must be asked: What is more important to our youth — to be No. 1 in the world or to play tennis for your entire lifetime? Honestly, Uncle Ed is a healthier role model than Federer because sports should be about health and development and love of the game.

I truly question the state of youth sports. We have travel teams, club teams, extra fees, hardcore competition, stress and coaches shaming kids. Why? What happened to the good ol' days when kids just played together outside for the love of the game?

Earlier this year, Uncle Ed and my cousin Jen told me they were playing mixed doubles in a tournament, and they had absolutely glee in their eyes when talking about it. What does Federer think about that? 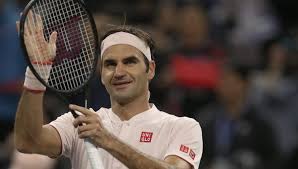 When I was a teenager, I remember Uncle Ed being extremely active on the court, an animal at the net. My Aunt Lynda had a different style. She was a baseline player and was just ridiculously consistent. We did not keep statistics, nor did we have Cyclops, but I believe it was common for her to have ZERO unforced errors in a match.

I cannot say that Aunt Lynda is better than Serena Williams, but she rivals her. The problem my aunt faces on the women's circuit is that it is full of personalities. Serena oozes personality, and the women's game has so much more chutzpah than the men's game.

I argue that tennis is the only sport in which the women's spectator version is better than the men's. This might sound sexist, and I understand that. But it's what I believe. With all other sports, I'd rather watch the men's version. But I prefer women's tennis to men's — and that hurts Aunt Lynda in the pantheon of sports greatness.

Women's tennis has longer rallies, and I also like its three-set format. For god's sakes, why do the men have to play best of five? And where are the personalities? I totally miss the days of McEnroe, Andre Agassi, Boris Becker, Andy Kellar and Richie Tenenbaum.
Posted by Joe Stevens at 8:39 AM