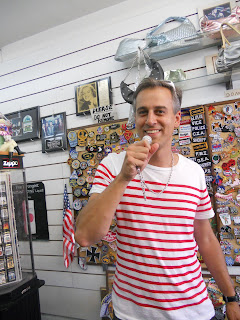 My theory is that jewelry is meant to decorate what is beautiful. And why can't a gentleman be beautiful? Now, the only problem with this theory is that years of conditioning that "man-jewelry" is for girlie men can't get me to wear much more than a wristwatch.

A while back, I vowed to wear more "man-jewelry." In fact, one of my New Year's resolutions was to obtain a medallion. But darn it, I recently found myself in August without adorning a medallion.

During a recent trip to Melrose Avenue in Los Angeles, I went on a medallion-searching spree, and I was semi-successful: I found a glorious medallion - a silver-laden shiny microphone medallion. 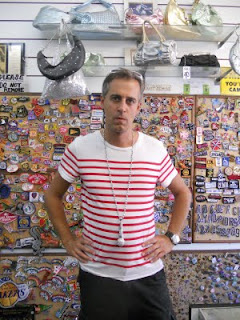 Life is strange. I was shocked when the asking price for such a medallion was $185.

Man, I was at a crossroads. The $185 price tag seemed too high, but I really wanted the medallion. So I tried my best haggling skills to get a reasonable price.

After various negotiations, the storekeeper announced, "Listen. I can go $55. But that's it."

I said, "Hey, look, this microphone medallion is kind of a joke. Paying that much is far too high and could kill the joke. My max here is $20."

Alas, I do not have the microphone medallion in my possession. It certainly would have been a nice addition to my wardrobe, but I also am a bit happy because if I started wearing a medallion, perhaps there would be a slippery slope and I'd soon be adorning man-jewelry like Liberace and/or Mr. T.
Posted by Joe Stevens at 9:19 PM