As I continue my quest for self-improvement, I need to draw the line somewhere of how far I will go to be in good shape. Therefore, I will not take steroids.

Granted, if I truly wanted to be in great shape, I should probably lift weights and opt for the 'roids. However, something just doesn't feel right about that plan.

One thing I have been doing, though, is curtailing my drinking. I am not going to go cold turkey with drinking because of my successful track record of social drinking. I believe I can drink in moderation and will keep that in my repertoire of skills.

As I cut down drinking, I am planning to not bring any liquor into my house until I have another one of my popular and classy parties (probably soon). So without buying liquor until then, I will only drink what is in my house. I happen to have a big bottle of Seagram's gin in my house, so I've been drinking a bunch of martinis of late. 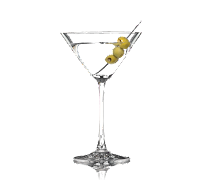 If you ever wondered if it is a good or bad idea to drink martinis, I suggest reading an old New Yorker article by Roger Angell. He described a martini in a perfect way that I'll never forget, saying it has a "stark medicinal bite." That's so true, and I've come to love that medicinal bite.

Glamorizing drinking is probably a bad thing, but perhaps no one did it better than James Bond. While I am a fan of Bond's wardrobe, I question his choice of martinis. He typically orders "a vodka martini, shaken, not stirred," which is redundant. Martinis are rarely stirred, so when ordering one, saying "shaken, not stirred" is a bit goofy.

I also prefer "dirty martinis" with gin to vodka martinis because they have more of that medicinal kick I dig and I like the extra drops of olive juice. And to me, ordering a "dirty martini" sounds far sexier than Bond's order. Who doesn't like a dirty drink now and again?