Local celebrities are way cooler than other celebs

Although it may be unfashionable to discuss politics in some circles, I made a political statement yesterday by voting for Kris Hanson for mayor of Long Beach, Calif.

Hanson was not running for mayor. In fact, I didn't even know I would do such a thing until I had my ballot in my hand. But I wrote in his glorious name: "Kristopher Hanson." Bob Foster was basically running unopposed in Long Beach, and my thoughts were these: "Man, we can do better than this. I'd rather see Hanson in charge."

The great thing about being a mayor, or a weatherperson, is that you're a local celebrity, and that means you're way cooler than a national, or international, celebrity. People do not know Foster or Hanson outside of Long Beach, but in this city, they are considered power brokers.

Workaholic weatherwoman Jackie Johnson is another example of this. She is extremely well-known in Los Angeles because she is on TV each week day from 8 to 11 p.m., but she is virtually unknown elsewhere. 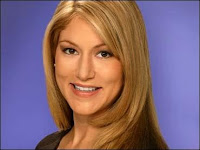 Foster and Hanson have the same fate in Long Beach. Foster is arguably better known, but that is only because he already has been mayor for a few years. Hanson is a columnist for the Long Beach Press-Telegram, is a regular at the coolest bars in L.B. and has a throwback look that makes dudes shake his hand and ladies swoon. Damn it, he should be mayor!

The only other local celebrity I have ever seen that is anywhere as cool as Hanson is longtime Cleveland meteorologist Dick Goddard, who, like Hanson, makes dudes shake his hand and ladies swoon. Now that I think of it, I bet Goddard would have to be a better mayor than many of the unbalanced folk who held that job during his 40 years on TV.